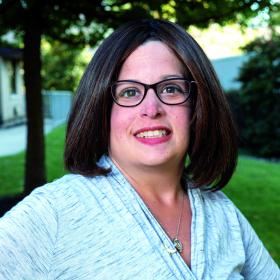 “Fox Chase has made this an amazing experience. When I call with questions, the people are very responsive. Cancer is a roller coaster ride, and through my progressions and stability, they have always been there.”
‐Tiffany Fagnani

I am 40 years old and currently live in Mechanicsburg, Pennsylvania. Although I work as a case manager for an insurance company now, I was previously employed as a full-time nurse. I have always been a busy person with plenty on my plate, so when I started feeling tired and losing weight, I thought it was caused by the stress of my daily routine.

It wasn’t until July 2017 that I couldn’t ignore my symptoms any longer. When I developed a migraine and felt a tremor in my arm and eye, I knew I was about to lose consciousness. I immediately called 911.

Shortly after, I was transferred to another hospital where I was diagnosed with non-small cell lung cancer that had metastasized (spread) to my brain. The doctors there told me that I had only six months to a year to live, even with treatment.

I was devastated and shocked by my diagnosis. I was only 36 at the time, had never smoked, and lived a healthy lifestyle. I was terrified and worried about what I was going to do. I knew I had a lot more in my life to accomplish, and I wasn’t ready to give up.

After undergoing several more tests, I learned that I had a specific kind of lung cancer that involves a mutation of the epidermal growth factor receptor, also known as EGFR (a type of protein expressed on the surface of cells). This type of mutation is commonly found in lung cancer patients like me who have never smoked or who have smoked very little in their lifetime. After this, I was referred to Fox Chase Cancer Center, where I was certain that I would get the best care possible.

My first appointment at Fox Chase was with Dr. Anthony J. Olszanski, a medical oncologist. He immediately got in touch with Dr. Michael Weaver, a Temple Health neurosurgeon who is also an attending surgeon at Fox Chase. Dr. Weaver performed a craniotomy to remove the mass from my brain in August 2017.

About three to four weeks after my surgery, Dr. Stephanie E. Weiss, a radiation oncologist at Fox Chase, started me on my CyberKnife ® treatments (which I received at Fox Chase Cancer Center Buckingham—an outpatient facility in Bucks County, PA). CyberKnife ® is a noninvasive radiation delivery system that can be used to treat difficult tumors in the lung, head, spine, and prostate. I received three CyberKnife treatments and began taking Tarceva ®, also known as erlotinib, a targeted cancer therapy for patients with the EGFR mutation.

I remained stable on the treatment until December 2018, when my cancer started to progress. I had a biopsy done, and while I was waiting for the results, I was a mess. I was coming to the end of the year that doctors had initially told me I had left to live, and I didn’t know what this latest development meant for my future.

At my following appointment, I can still remember Dr. Olszanski assuring me they would get it taken care of. He spoke to Dr. Christopher J. Manley, an interventional pulmonologist, and had everything set up for an endobronchial ultrasound (a procedure used to diagnose different types of lung diseases or cancer) that same day.

Dr. Olszanski put me even more at ease when he called on Christmas Eve to let me know that I had the T790M mutation, which meant that my treatment would likely be effective. I could not have asked for a better Christmas gift!

I started taking Tagrisso ®, a targeted therapy also known as osimertinib, in January 2019. During July 2020, I was treated with radiation on the right upper lobe of my lung with Dr. Sameera Kumar, a radiation oncologist. I have been stable since then, and I go back to Fox Chase about once every three months for follow up.

What has been most incredible about my cancer journey with Fox Chase is seeing firsthand how research on my specific type of cancer has been developing. I got the chance to tour some of the labs and see with my own eyes how researchers are learning more about the type of cancer that I have!

My dream team at Fox Chase has filled me with so much hope. During the pandemic, I was confident enough to build and move into to my new home in Mechanicsburg. Once the pandemic is under control, I am looking forward to taking a trip to Italy in 2022 for my five-year “cancer-versary.” I can’t recommend Fox Chase enough to anyone looking for first-rate treatment.