Should You Get a Second Opinion for Pancreatic Cancer?

If you or a loved one has been diagnosed with pancreatic cancer, you most likely want to start treatment as soon as possible, but it’s worth the effort to seek a second medical opinion first. 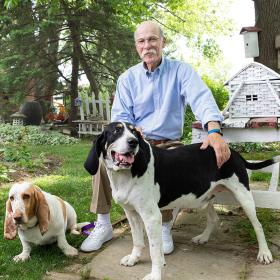 “Being defeated is a matter of perspective and will. I feel that no matter how serious the illness is, I can overcome it with the right help and the right attitude."
‐Alan Zlatkin

I have always believed in the power of having a positive attitude.

Since my youth, I have believed that the key to succeeding in anything is to never give up. On days where that mentality doesn’t come so easily, all I have to do is look at the medical bracelet on my wrist.

It says: “diminished but never defeated.” I made this my personal mantra after I was diagnosed with pancreatic cancer at the age of 74.

I first saw how cancer could diminish someone when a neighbor I was friendly with developed lung cancer. One day when I saw him, his six-foot stature had completely changed. He was stooped over, thinning, and pale.

The memory of my neighbor’s experience came back to me when a mass was spotted on my pancreas in April 2017. I had been losing weight and was having trouble keeping food down, and when I brought this up to my family physician, they referred me to an endocrinologist (who spotted the mass). After the mass was found, I was referred to Fox Chase Cancer Center.

I greatly respected the doctor who referred me to Fox Chase, so when he said to go there, I knew it was right. They helped ease the chaos almost immediately.

I first saw two gastroenterologists at Fox Chase, both of whom are interventional endoscopists. After they treated me for blocked bile ducts, they conducted biopsies that confirmed I had pancreatic cancer.

Before receiving my diagnosis, I had already decided to be positive and not let my emotions get the best of me when confronted with the news. From the moment I found out I had cancer, I decided the best approach was to be stoic and confident that I could overcome it with a great medical team by my side.

After my diagnosis, I received various treatments from a team of Fox Chase physicians: Dr. Michael Hall, a medical oncologist and genetic risk specialist, and Dr. Joshua Meyer, a radiation oncologist. When I first met them both, the first thing I felt was a sense of calm and confidence in them. Every doctor I met at Fox Chase was incredible.

In July of 2017, I began chemotherapy treatments to shrink the tumor enough to make it operable. I began radiation therapy in November of 2017 and, ultimately, underwent a Whipple procedure in January 2018. The complex procedure involved removing the head of my pancreas, part of my small intestine, my bile duct, and my gallbladder before reconnecting the remaining organs at the end of the procedure to allow for normal digestion.

During my surgery, I also had CivaSheet inserted, which is an implant that emits focused radiation at the surgical site to destroy any remaining cancer cells after the procedure. Following surgery, I underwent a second chemotherapy regimen that took place over a six-week period.

Throughout these treatments, I often found it difficult to stay positive and began to feel as if my cancer was dominating my life.

With help from my wife, Patricia, I was able to make some adjustments to improve my quality of life while undergoing treatment. One change was a new diet (after 40 years of being a vegetarian). I had developed diabetes as a side effect of my cancer, and unfortunately, had to eliminate pasta and other dishes from my diet to keep it under control. Luckily, my wife was able to formulate a new diet for me.

Patricia and I have been together for 49 years, and she is the best thing that ever happened to me. During the initial stages of my cancer journey, she couldn’t have done more for me. She did a lot of research into nutritional issues so she could help me get stronger. She was the best during that time and continues to be.

I have been in remission for two years now and spend my days keeping active. I walk my dogs, Molly and Sully, several miles daily and read as many books as I can find. I also come back to Fox Chase every six months to check in with my doctors.

My ultimate goal is to spend as many years as I can with my family and to watch my grandchildren grow up.

I’d like to reach five years of remission, but I need at least 10 years more to dance at my granddaughter’s wedding. I also want to watch my grandson play ball in high school. Right now though, I’m just looking forward to the end of this pandemic.

After my positive experience, I would tell anyone to go to Fox Chase. You will get the proper care, treatment, respect, and kindness that the doctors, nurses, and staff provide every day.

Being defeated is a matter of perspective and will. I feel that no matter how serious the illness is, I can overcome it with the right help and the right attitude.