Robert Lougheed: A 'Burning Love' of Life After Pancreatic Cancer 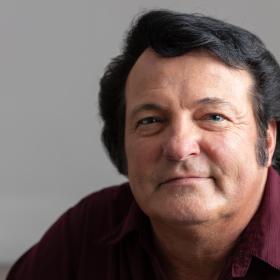 "I got an exceptional care team at Fox Chase. And thanks to them, I’ve had the chance to embark on a most remarkable new life."
‐Robert Lougheed

When I was diagnosed with pancreatic cancer, I didn't know what my future held. But, after beating cancer, I was inspired to enjoy my life to the fullest. For me, that starting a career as an Elvis Presley tribute artist and giving back through the power of music.

My journey started in 2007 when I was experiencing tremendous pain in my leg and hip. I went to a hospital in Wilmington, Delaware, thinking I may have broken something. The doctors didn’t find anything, so I went back home. Six hours later, still in immense pain, I was back in the ER. I had been trying to tough it out and was on my way to my job as a tile salesman, but stopped because I knew something was really wrong.

During my second ER visit, doctors ran a series of tests and scans. They couldn’t find anything wrong with my hip, but noticed a small spot on my pancreas. Since I had no back pain, jaundice, or other symptoms that could indicate a bigger problem with my pancreas, they weren’t too worried. They just wanted to figure out what was causing the pain.

Two days later, I was released and the results of my scans were sent to my family doctor. He called and told me to come to his office and to bring someone with me. I was stunned to learn I had pancreatic cancer and needed to have a Whipple procedure. This surgery would involve removing the head of my pancreas, the first part of my small intestine, my gallbladder, and my bile duct.

I was set up with a doctor in Wilmington and I brought my daughter, who had just graduated as a nurse and started working at Children’s Hospital Of Philadelphia in pediatric oncology. After the visit, we decided to seek a second opinion and find a doctor who had more experience. With such a serious surgery, I wanted to be in the best possible hands. Someone close to me had gone to Fox Chase Cancer Center years earlier, and so I decided to get an appointment there. I found Dr. John Hoffman and though he wasn’t taking any new patients at the time, I gave my information anyway and he agreed to take on my case.

Talking with Dr. Hoffman, I immediately took a liking to him. I felt comfortable with him and knew he was the surgeon I wanted. The morning of my surgery, my whole family gathered and my sister reminded me it was our mom’s birthday. She had passed four years earlier and I knew she was keeping an eye on me during surgery.

The surgery lasted more than 10 hours, and I spent the next three days in the ICU. I was well taken care of, but recovering from such a complex surgery was tough. I spent nearly a week in the hospital and every day, Dr. Hoffman was there to check on me – even on the weekends. I couldn’t believe how dedicated he was to his patients.

After almost a week in the hospital, I was itching for freedom. Dr. Hoffman could tell I was ready to go and released me so I could continue my recovery in the comfort of my home. Though I was grateful I didn’t need chemotherapy or radiation, I still struggled in the aftermath of the surgery. I went home with drains in and I was frustrated I couldn’t be as active as I wanted. Dr. Hoffman reminded me that my body had been through a lot, and adjusting to my new normal would be a long process. I just needed to be patient and go easy on myself. Gradually, I regained my strength, and after a year, I felt like my old self again.

Keeping the Spirit of Elvis Alive

In 2009, after the company I worked for almost closed, I packed up and moved to the beach in Delaware. I had planned to relax and take it easy on the coast, but before long I found myself embarking on a new career.

One night, I was out goofing around at a beachside bar and got up on stage to do some karaoke. When I got off stage, a woman asked how much I charged for my shows and if I would do an Elvis show at the assisted living facility she worked at. I told her I wasn’t a professional – I was just a guy doing karaoke – but she said they could rent me an Elvis suit if I would come and perform. I had loved singing and performing as Elvis in high school – I even won a talent competition – but it had fallen by the wayside. I thought it would be fun to give it a shot and agreed to do the show. Looking at the expressions on everyone’s faces, I realized how much fun I was having. Soon after, I bought my first set of equipment, put together a band, and set out for a new adventure. Over the years, my band and I have played all around the country, playing with other tribute acts at casinos, and playing shows at benefits.

On the five-year anniversary of my surgery, I got a phone call from Dr. Hoffman. Since my scans had been continuously clean, he told me to go out and live my life. I had reached a critical milestone and he felt I was in the clear. I told him I’d been living my life since the day he let me out of the hospital and man, have I ever. My cancer journey gave me a new lease on life.

While I’ve loved the chance to explore this new life, I’m most thankful for the opportunity to see my two daughters grow into wonderful young women. When I was first diagnosed, a million thoughts flashed through my mind. Would I live to see my girls get married? Would I see grandchildren? I was only 47 and I had so much life left to live. My oldest daughter got married two years ago and my youngest is getting married in September. I’ve been able to be there for my daughters during their big moments and all the little ones too.

And as odd as it sounds, I’m grateful for my bout of shingles. I had never had them before that day and haven’t since then. I wasn’t a guy who went to the doctor much and without the shingles, the cancer probably would have gone unnoticed until it was too late. I’ve often said I survived this disease by accident. And while my diagnosis may have been an accident, the rest of my journey sure hasn’t been. I got a great doctor and surgeon in Dr. Hoffman and an exceptional care team at Fox Chase. The most important thing I’ve learned through this is that you have to get to a facility that knows what they’re doing. That’s why I chose Fox Chase. And thanks to them, I’ve had the chance to embark on a most remarkable new life.