Sandi Nick: Fighting Cervical Cancer with Family by Her Side 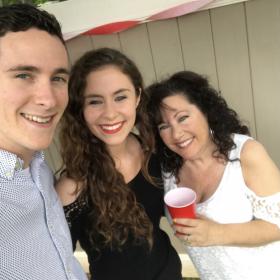 “I will never let cancer define me. However, it has given me a different perspective. I learned not to sweat the small stuff and how to appreciate every day as a celebration.”
‐Sandi Nick

As a single mom, I raised my son and daughter on my own. While they were growing up, I worked in a high-stress position in advertising sales, but I decided to switch careers and start nannying once I became an empty nester.

I had been enjoying my career shift when I started noticing some spotting. Even though I hadn’t had my period in years, I didn’t think much of the bleeding at first and put off going to the doctor. As more time went on, I became more concerned and mustered up the courage to go to see my gynecologist. He quickly noticed something wasn’t right, and he ordered a biopsy to determine what was wrong. Five days later, the biopsy results had revealed cancer, and my gynecologist immediately set me up with an appointment at Fox Chase Cancer Center.

My son drove me to my first appointment at Fox Chase, but because of the COVID-19 pandemic, he couldn’t come in with me. I met with gynecologic oncologist Dr. Gina M. Mantia-Smaldone who informed me that I had Stage II cervical cancer. While she was incredibly kind and supportive, I was in total disbelief and immediately worried for my son (who was listening to the appointment via phone call). Even though my children were adults, I knew my diagnosis would be difficult for them. After the appointment, we drove home and I spent the next two days curled up in a ball, fearful for my future.

On the third day after my appointment, I woke up and said out loud to myself: “Ok, you have to get it together. Summon your inner warrior and fight.” From that day forward, I was on a mission. I had to be around for my kids—I wanted to see my daughter get married and I wanted to meet my future grandkids.

My brachytherapy treatments were especially difficult, but I knew I was in good hands with my radiation oncologist Dr. Krisha Howell. I underwent brachytherapy treatment on Fridays, and I would have to come in early. My son would pick me up at 5:00 a.m. those mornings for my treatments at 5:45. During my treatments, a rod was inserted while I was under anesthesia, and when I woke up, I would need to stay very still while the radiation was being delivered. The rod would then be removed.

On those Fridays, my daughter would take me home and stay with me over the weekend while I recuperated. At the end of each day, I would mark an “X” on my calendar. Day by day, week by week, I got closer to the end of my treatments.

After ten weeks of treatment, I had to wait 90 days for a PET scan to determine if the cancer was completely gone. That time period was hard for me—I finally had hit the finish line, but I felt like I was holding my breath.

An added complication was a blood clot in my leg that developed during my treatments. It caused me to have trouble walking, and I had to learn how to inject myself with medicine for it. My son helped me figure out how to give myself the injections, and eventually, I was able to switch to an oral medication.

During my treatments and the waiting period after, I was so lucky to have my children and their significant others by my side. Life really comes full circle. I had taken care of my babies for so long, and now they were taking care of me.

After the waiting period, I received my scan and found out that I was in remission! I was thrilled and so proud of myself for everything I endured.

Even though I am in remission, I go for checkups every three months. I am still managing some lingering side effects of the treatments, but I have been able to go back to work part time and resume a more normal life.

My daughter is getting married this October, and I am so excited to be there and celebrate with my family. I don’t know what I would have done without them this past year. My children put on a brave face for me during my treatment regimen, and their belief that I would be okay gave me the strength to keep fighting.

My team at Fox Chase was also extraordinary, and they absolutely saved my life. I was really surprised at the bond I created with my doctors and nurses; I just adore my team.

My hope is that by sharing my story, I can spread awareness of cervical cancer and inspire others going through a similar treatment regimen. I want to encourage other women to face their fears and go to the doctor if they notice something out of the ordinary. If I can convince even one person experiencing the same symptoms I did to go to the doctor, it would mean the world to me.