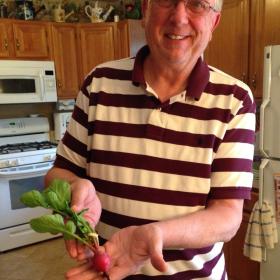 “Dr. Uzzo is a fabulous doctor. He was very honest and sincere, and he made me feel very confident in his skills and ability."
‐Norm Faus III

My name is Norm Faus III. I live in Lititz, Pennsylvania, which is about 80 miles west of Philadelphia. My wife and I have been married for 53 years. We have two grown children and several grandchildren. That makes me an old man of 73.

Generally, I’ve been very healthy over the years. The only thing I did develop, about 20 years ago, is peripheral neuropathy. It was what the doctors call idiopathic, meaning I didn’t have diabetes or cancer or anything that would have caused it to develop. Otherwise, I haven’t had any serious health issues.

My kidney cancer diagnosis caught me totally off guard. Prior to COVID-19, my primary doctor had changed a medication I was taking, and he wanted me to do an ultrasound three months later to check on my liver and make sure there weren’t any adverse effects. He also wanted to check on my left kidney where, nine years prior, he had noticed a small cyst.

I got the ultrasound in April 2020. A few days later, my wife and I were together in the car, and I got a call from the doctor’s office. They told me I needed to go see a kidney specialist because they had found a tumor on my kidney.

My meeting with that specialist took all of five minutes. He took one look at my information and said that based on where the tumor was located, the way it looked, and how it was described, there was an 85% chance that it was cancerous. He told me that because it was on the left side—near the spleen, intestine, and pancreas, and right where the vein and the artery meet at the kidney—he felt that the only way to be safe would be to remove the kidney.

When I met with another surgeon in the same group, he gave me more bad news: Apparently, the tumor affected not one but two renal veins. This made the surgery even more precarious, and if the tumor was cancerous and had attached to any of the arteries or veins, it could have spread. Now I was panicked, because not only could I lose a kidney, but I might be looking at a true worst-case scenario—no longer being on this earth.

This surgeon said that if I was willing to travel, I should go see Dr. Robert Uzzo, chair of the Department of Surgical Oncology at Fox Chase Cancer Center. He said Dr. Uzzo was the best kidney surgeon he knew and maybe my best chance of saving the kidney. I absolutely wanted to meet with this man and his team at Fox Chase.

Due to the pandemic, I did a teleconference with Dr. Uzzo in July. He is a fabulous doctor. He was very honest and sincere, and he made me feel very confident in his skills and ability. After reviewing everything, he told me that based on the type of tumor I had, I could wait to have the surgery—we were in the middle of COVID, so that was a risk factor—or I could have it right away. My wife and I prayed on it and ultimately decided I should go for it and get the surgery done. My surgery was scheduled for the end of August.

On the day of surgery, my grandson drove me to and from Fox Chase. Because of COVID, my wife would have had to wait in another area for up to three or four hours with nobody to talk to and nothing to do. So she decided to stay home, and my grandson, who had gotten a job in the Philadelphia area, agreed to drive his grandpa.

Because my wife couldn’t be there, Dr. Uzzo said he would call her as soon as the surgery was over. He said that if what he found when he opened me up wasn’t very serious, the surgery would take an hour and a half to two hours. On the long side, he said, it would be three hours.

The surgery lasted five hours. When I finally came out and was going to my room, the first question I asked was, “Did he save the kidney?” The nurse said yes, Dr. Uzzo had saved my kidney.

I had no issues after the surgery, and here is the real kicker: When I went back for my follow-up ten days later, Dr. Uzzo was still waiting for results from pathology about whether the tumor was cancerous. The phone call came while I was there, and when Dr. Uzzo put the phone down, he looked at me and said, “Now, do you remember when we met that I told you that I felt that there was an 85% chance that the tumor was cancerous? You are in the 15%. It’s a benign tumor.”

Returning to a Healthy, Normal Life

It’s now a monitoring situation: There are certain levels of things in my kidneys that I have to watch to make sure that they don’t go out of whack. But I am blessed that that is the case and that I’m healthy and able to live a normal life. I love to do things with my children and see my grandchildren. My 25-year-old grandson and I love to go fishing together.

Thanks to Dr. Uzzo and his skill and his ability, my surgery had the best result possible. I praise the Lord for giving me such a fine surgeon and caring nursing staff to see me through this scary time.