How to Choose a Breast Cancer Surgeon

Dedicate some time to finding the right doctor, even if you need surgery soon. It will always be worthwhile. Here’s how to find an expert who fits the bill.

Kat Kramer: Finding a Thread of Hope in the Face of Cancer 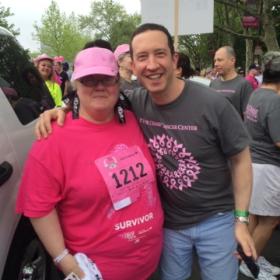 “Once you are a part of the Fox Chase family, you’re a part of a bigger experience, and I encourage everyone to find a way to give back.”
‐Kat Kramer

When I was growing up in Philadelphia’s Olney-Feltonville neighborhood, my grandmother made sure I knew how to run a household. She taught all of her grandchildren how to do essential household tasks, like sewing and cooking. I always looked forward to the day when I’d get to follow in her footsteps and pass these skills along to my son, Alex.

But when I was diagnosed with breast cancer in 2015 at age 43, I found myself worried about whether I would be able to carry on family traditions like this.

My breast cancer journey began in the fall of 2015. I was having horrible pain in my lower abdomen, so I went to see my OB/GYN. After a series of ultrasounds, he discovered what he believed was a problem with one of my ovaries. He decided to perform surgery at a local hospital to check things out and remove the affected ovary, if need be. The surgery was scheduled for the week before Thanksgiving. Although I knew this would put a damper on my family’s holiday festivities, I had to find some relief for the excruciating pain I was in.

On the day of my surgery, I woke in a hospital room with no idea what was going on. My husband told me my gynecologist had stopped the procedure and gone to find a general surgeon. It turns out that my ovary wasn’t causing the pain—it was my appendix. There was an infarction of one of my fallopian tubes which caused a perforated appendix.

What was supposed to be a same-day surgery turned into a full week’s stay in the hospital and eight weeks out of work. Because they opened up so much of my abdominal area to correct the issue, the healing process was extremely difficult. After spending a week in the hospital, I had to return for weekly appointments to monitor my recovery. It was during one of these appointments that my doctor informed me that I was overdue for a mammogram appointment.

I began getting preventative mammograms at the age of 40, due to my family history. Both of my grandmothers had been diagnosed with breast cancer. But, during this particular year, my other health issues caused me to put my yearly mammogram on hold. Still, my doctor kept urging me to get one. At the end of December, I went in for a mammogram followed by a biopsy.

On January 8th, my biopsy results came in. I was diagnosed with Stage 1 breast cancer.

I was completely shocked to learn I had breast cancer. At the time, I couldn’t help but think: “This isn’t supposed to happen to me, I’m too young.”

I was only 43 years old and living what I like to call a “brown rice life.” I didn’t smoke, drink, or do drugs. I ate healthy foods. And I breastfed my child for nearly 10 months. I did everything you’re supposed to do to prevent this from happening; but cancer can happen to any person at any age with any history.

I’m so grateful for my doctor’s persistence. If he hadn’t kept insisting that I go in for a mammogram, I would never have known I had breast cancer. There were no lumps, discharge, or any other outward signs of my condition. I was diagnosed before the cancer had a chance to progress to a more advanced stage.

Where You Go First Matters

My mother-in-law, who had been treated for breast cancer a few years earlier, always says: “You never want to have cancer, but if you do have cancer, you want to go to Fox Chase.” Because I grew up in the Philadelphia area, Fox Chase has always been in my backyard. So, after receiving my diagnosis, I knew exactly where to go.

I was in excellent hands with my oncologist, Dr. Richard Bleicher. He’s one of the warmest surgeons I’ve ever encountered. He’s the kind of guy who will sit with you, hold your hand, and make you feel well taken care of. In February 2016, I underwent a bilateral lumpectomy. I also had my sentinel lymph nodes removed.

After surgery, I began six weeks of radiation therapy under the care of Dr. Penny Anderson. Radiation was tough for me. I had to work full-time throughout my treatment because I had already been out of work for eight weeks with my appendix surgery. I developed strep throat two weeks in, but the staff working in radiation went above and beyond to make me feel comfortable. They always had hot tea waiting for me after every session.

“Radiation is hard and can be overwhelming, but Fox Chase made it fit into my crazy schedule—with work, a commute, and a nine-year-old at home.”

On June 8, 2015, I completed my last radiation treatment and rang the bell at Fox Chase. I’ve been cancer-free since then, but I still return to Fox Chase every six months for checkups.

A Common Thread of Compassion

Although my cancer experience was traumatic, it taught me the value of community. Even on my darkest days, I was never alone throughout my cancer journey. Members of my family and local community compassionately pitched in by helping out with childcare, delivering home-cooked meals, and offering a listening ear whenever I needed it. I also experienced an outpouring of compassion at Fox Chase. Everyone—from the doctors and nurses to the janitors—participates in making cancer a less daunting experience for Fox Chase’s patients.

The compassion I received throughout my journey inspired me to give back. One day, as I was walking past Fox Chase’s volunteer office, I overheard two women talking about how they needed more neck pillows for patients undergoing radiation and chemotherapy. Thinking back to the sewing skills my grandmother passed down to me, I decided to offer a helping hand.

After teaching my now 13-year-old son, Alex, how to sew, we began making handmade neck pillows for Fox Chase patients. Many people have contributed to our mission by making their own handmade neck pillows and donating supplies to us. This experience gave me a chance to pass along my sewing skills, and the opportunity to pay it forward by bringing comfort and hope to cancer patients, survivors, and loved ones at Fox Chase.