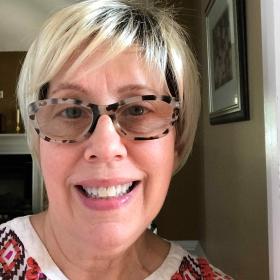 “I lost my hair, but I never even got sick, which I was fully expecting to happen. I kept waiting for the other shoe to drop, but it never did."
‐Deborah Matzura-Wolfe

I am 58 years old and currently live in Phoenixville, Pennsylvania. I have always been diligent about my health. I keep active, cook and eat healthy meals, and make sure to get periodic screenings and schedule appointments when necessary. With no family history and my proactive approach to health, it came as a surprise to me when I was diagnosed with ductal carcinoma in 2019.

Getting screened for breast cancer was always an important part of my health regimen. I would take advantage of the Fox Chase Mobile Screening Unit that came to my office. The screening unit provides mammography services to people in the community so that they don’t have to travel to get an appointment. It just so happened that in December 2018 I was unable to use the mobile unit because I was in the process of moving. It was still important to me to get checked, so I decided to go to Fox Chase’s main location to get my screening done. Before I could set up an appointment, though, I noticed a lump on my breast.

I immediately became concerned and made an appointment with my OB-GYN and Fox Chase. I had an ultrasound done and was asked if I had recently been injured to rule out some other possibilities. When I told them I hadn’t been injured, doctors were still unsure what the mass was. I went for a biopsy at Fox Chase in January of 2019, and five days later, I received the news telling me it was an 8-millimeter tumor.

I had been diagnosed with ductal carcinoma, and at that point, I made an appointment with Dr. John Daly, a surgical oncologist at Fox Chase. He was great. At my appointment, he answered all of my questions and talked me through exactly what the lump was. He was very positive and patient with me, so I was able to stay relatively calm throughout my appointment.

A Smooth Course of Treatment

In February 2019, I had a lumpectomy, which is a breast-conserving surgery to remove the cancer. It went well and I had my lymph nodes tested to see if the cancer had spread beyond the breast. Those results came back negative.

I was then referred to Dr. Jennifer Winn, a medical oncologist at Fox Chase, and had my first chemotherapy treatment in April 2019. She was another doctor who never got tired of my questions. When I finished asking her questions, she’d reply with, “What else do you have for me?” She was always willing to spend time with me and never appeared as if she didn’t have time for her patients. She was just so pleasant.

All the nurses were great too. When I went in to have my chemotherapy infusions, I felt like they were my friends. I actually didn’t mind going.

The chemotherapy treatments went surprisingly well, and I had no major issues. I lost my hair, but I never even got sick, which I was fully expecting to happen. I kept waiting for the other shoe to drop, but it never did. I was able to continue going to work without taking any time off.

After taking a break from chemotherapy, I began seeing Dr. Randi Cohen, a radiation oncologist at Fox Chase's East Norriton Campus (Fox Chase Cancer Center East Norriton – Hospital Outpatient Center), in July and August of 2019. I didn’t know anything about radiation therapy, and she answered all my questions, drew pictures, and was very helpful.

In addition to radiation therapy, I also received infusions at East Norriton. It was so convenient, because it was only a 25-minute drive from my home, as opposed to nearly an hour trip to get to the main campus.

I was so surprised and happy about how good I felt that I was able to take a vacation in Belize in September 2019. Once I returned, I started back on targeted therapy and my last treatment was in March 2020.

My journey through cancer was a surprisingly painless one, and I believe the doctors at Fox Chase helped make that possible. I’m now going back for checkups every six months and I’m getting back into my normal routine.

Once I finished up treatments, I continued spending my time doing what I love—dining out and cooking for my friends and loved ones. I’ve really enjoyed having people over for dinner and going out to eat.

I think positivity is the key to getting through any tough diagnosis. I would tell someone in this situation to stay positive and try not to dwell on it or you’ll make yourself crazy. Go for a walk, exercise, and do things to keep yourself occupied. Also, don’t believe everything you read on the internet.

I am lucky to have a lot of friends and neighbors as my support group, which I think is important when dealing with this kind of diagnosis. The physicians at Fox Chase were also very positive, which was a relief to me. They were taking time out for me and it made me feel like I was being taken care of. I would recommend Fox Chase to anyone because at Fox Chase, I wasn’t just a number.