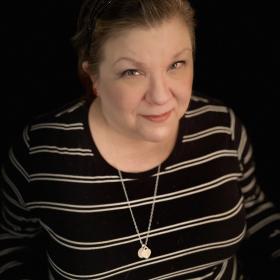 “Everyone was so respectful and compassionate. Nobody ever made me feel like I was stupid for asking questions or that they were too busy to explain things to me.”
‐Dawn Maria Dent

I love shopping. I collect handbags, jewelry, shoes, and luxury items, and I love high-end designers. It’s what you buy when you celebrate milestones. I have a YouTube channel—Dawn Loves Couture—and I use it to post unboxings and reviews of the items I buy. It’s like shopping with friends. But I had to put that all on hold when I was diagnosed with cancer.

My first sign that something was wrong was Thanksgiving Day, 2019. I woke up and noticed I had some spotting. I had reached menopause earlier that year, so at first, I thought, well, maybe I haven’t finished menopause and it’s just my period.

It happened again a month later and it kept coming back. By February, I thought, “I better see somebody about this.” Then the pandemic hit and doctor appointments were canceled. But by April, I knew something was really wrong. The bleeding was heavier and more frequent, and I had abdominal pain.

I made an appointment with a gynecologist who I unfortunately had a bad experience with. She did some tests, but the communication was abysmal. I felt that she was treating me very flippantly. When she finally told me I had uterine carcinosarcoma, I thought, “I want to go to Fox Chase Cancer Center.”

I knew Fox Chase was the best cancer center in the area. My dad had treatment there a few years ago and they didn’t play around. They’re the experts, and when you find out you have cancer, you want to be seen by the experts.

My experience at Fox Chase could not have been more different than my experience with the first doctor. From the start, it was much more professional and comprehensive. The day I called, I was referred to a patient coordinator and she got me in to see Dr. Stephanie King, a gynecologic oncologist, within a few days.

Everyone was so respectful and compassionate. Nobody ever made me feel like I was stupid for asking questions or that they were too busy to explain things to me.

Dr. King did an exam and looked at my previous results. “There’s no guarantee, but based on your biopsy and ultrasound, it looks like there are no other tumors. That means this is a treatable cancer—potentially curable,” she said. Potentially curable! That sounded good to me.

I had a total hysterectomy on July 2, 2020. It was supposed to be laparoscopic, but my uterus was too big, so she had to do a traditional abdominal hysterectomy. She gave me a tiny bikini scar, and now it’s barely visible.

So technically, the cancer was already in remission because they got it all. Still, Dr. King said I had some floating cancer cells, so we went ahead with chemo and radiation to ensure we got everything.

They gave me six weeks to recover and then we started chemotherapy. Kathy Smith was the nurse practitioner who took care of me while I was getting chemo. She followed me through treatment, monitored my blood work, and helped me through it. She was great.

Honestly, I had hardly any side effects from chemotherapy. I got carboplatin and Taxol. I never had any nausea or appetite loss. They gave me nausea medication but I never took it. A few days after getting the infusion, I had pretty bad joint pain for a day or two. And my magnesium levels dropped, so they gave me an infusion of magnesium in my IV. Oh, and I lost my hair. Unfortunately, the very expensive wig I bought turned out to be hideous. I wish I picked a better one!

I know it’s unusual to have so few side effects. Kathy told me she never saw anyone do this well on chemotherapy in all her years as a nurse practitioner. Maybe it helped that I wasn’t afraid of the chemo.

I’ve actually taken infusion medications before because I have rheumatoid arthritis. You just read a book or catch up on your email while you sit there, and they administer the drug. So I knew what to expect and it wasn’t scary to me.

After chemo, I went for radiation, which was handled by Dr. Krisha Howell, a radiation oncologist. I had three brachytherapy treatments over about two weeks. The treatment involved inserting a tube into my vagina and then putting radioactive material in the tube.

I’ll be honest, it wasn’t pleasant. You’re lying naked on a table with a glass cylinder between your legs. But other than the affront to my dignity, I actually had no side effects from the treatment itself. I didn’t feel the radiation at all.

I finished radiation in December 2020, a little more than a year after my symptoms started. So I bought a Yves St. Laurent bag to celebrate.

Now I feel great. My hair is growing back. It looks like a helmet, but it’s getting longer. And I have waves now, which I love!

This summer, I got into Hermes. I bought a tiny Hermes bag as part of my birthday haul. I thought, “I need a treat!” So now I’m celebrating every chance I get. You really do only live once.