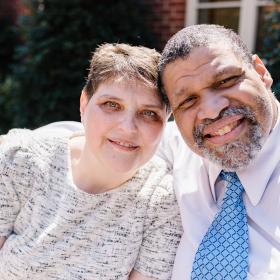 “To go into a surgery as big as that was, and walk out with no fear, that was remarkable.”
‐Trela Abad

My cancer was found by accident! In 2018, I was suffering from chronic urinary tract infections (UTIs) and, after a variety of treatments, they weren’t getting better. My doctor suggested a CT scan of my lower abdomen, kidneys, and bladder to rule out anything serious.

The scan found a stone in my appendix and, after consulting with my doctor, I was advised to have the stone removed. About a month later, after I returned from a business trip, I went in for a routine appendectomy.

During the surgery, the surgeon noticed that there was a mucin (a mucous-like substance) attached to my appendix. While he was concerned about it, he encouraged me to visit a surgical oncologist before jumping to any conclusions. I took his advice and saw a surgical oncologist at a community hospital, who ordered a second CT scan. Unfortunately, this scan revealed that the mucin was everywhere. That oncologist immediately thought that I would be a good candidate for hyperthermic intraperitoneal chemotherapy (HIPEC), but it wasn’t offered at that hospital. Luckily, he knew that Fox Chase offered it and he sent me to Dr. Sanjay Reddy for further treatment.

Even at that point, I don’t think I completely understood what was going on or how serious it was. When I met with Dr. Reddy, he ordered more CT scans, biopsies, and a colonoscopy to ensure that an accurate diagnosis and treatment recommendation was made. After all of those tests were completed, I was diagnosed with low-grade appendiceal mucinous neoplasm (LAMN), which basically meant that mucin had spread throughout my abdomen.

This was an extremely rare diagnosis, but Dr. Reddy was able to completely put me at ease. He confirmed that I was a good candidate for HIPEC, which is an extremely involved and intricate treatment. Dr. Reddy is one of only a few doctors that performs this surgery in the Philadelphia area, so I was thrilled to know I was in good hands.

HIPEC has three main parts. First, the surgeon removes the mucin that is attached to the organs within the abdominal cavity, then a heated chemotherapy is administered directly to the area to treat any mucin that could not be removed. Finally, the chemotherapy is removed and the surgeon closes everything up. Before the procedure, I was told it would take 12–14 hours and involve a long recovery time. However, it was the best option for me, and I had absolutely zero fear going into it. Dr. Reddy took his time explaining everything to me, and it was his positive and confident attitude that kept me calm.

In the weeks leading up to my procedure, I made sure to enjoy a lot of things I knew I wouldn't be able to afterwards. I was optimistic on the day of the procedure, and the next thing I knew, I woke up to my mom and daughter next to my bed in the ICU.

I knew I would have to be in the ICU immediately after my procedure, but I was surprised by the number of things I was hooked up to. It didn’t bother me too much, though, and I was more alarmed that it was Sunday and I had slept through the entire day before!

During my recovery, I learned that my procedure took 12.5 hours, and everything went according to plan. In two and a half days, I was out of the ICU and moving around. It was rough at first, but I was so determined to get back to normal that it motivated me to walk around and do things on my own. I felt like I was back to normal in a few months (though I was told it could take up to six).

In the year following my surgery, I got scans every three months that were all clear. Because of these great results, I am now able to have checkups every six months. Sometimes, I think if it weren’t for that stone in my appendix, my future would be very different.

In July 2019, after I recovered from my surgery, I met a man through church and found love. Jacques and I got married a year later and can’t wait to do a lot of traveling together. We are planning to move to Texas; so, before the move, we want to see as much of the Northeast as we can!

Even though I will be living in Texas, I will always travel back to Fox Chase for my checkups with Dr. Reddy. To go into a surgery as big as that was, and walk out with no fear, that was remarkable. I owe that positivity to how he cared for me.