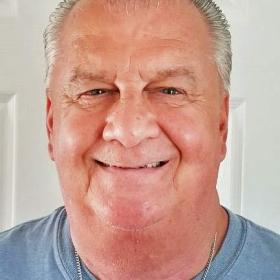 "I have so much respect for Dr. Chen because he keeps me going. He is such a pleasant guy who is always very calm."
‐Thomas Vanella

One night a number of years ago, when I was at work, I went to the restroom and noticed blood in my urine. I never had any discomfort, so when my boss suggested I go to the hospital right away, I decided I would finish my shift and go to my usual doctor the next day.

When I gave him a urine sample, I noticed there was less blood and then things started to clear up. My doctor still suggested I get an X-ray, which led him to think I had a cyst on my kidney that had burst, causing the blood to show in my urine.

About a year later, the symptoms reappeared, and this time my doctor referred me to a urologist. When the urologist did an MRI, he found that instead of a cyst, it was a tumor on the kidney and he suggested I have my kidney removed. I was not too sure about having it completely removed and a cousin who had been working for Fox Chase for over 40 years suggested I get a second opinion with a doctor there.

My wife and I came to Fox Chase and met with Dr. David Y.T. Chen, a urologic oncologist. He gave me an option that would allow me to keep most of my kidney, but the surgery would be invasive and require a longer healing process. He then suggested that if he removed the kidney entirely, he could perform it laparoscopically and I would be fine shortly thereafter.

It was July 2008 when I decided Dr. Chen should remove the kidney. During routine follow-up appointments with him about two years later, he found that I was developing very small tumors in my bladder and on my urethra.

Ever since then, I come to see Dr. Chen every three to four months to check the development of these tumors and have them removed when necessary, which he can do with me watching on a monitor.

Even though I have been doing this for so many years, I count myself lucky because I never had any serious complications. Doctors now know this kind of cancer can be caused by Agent Orange being used in Vietnam, where I served.

There is no other treatment besides removing the slow-growing tumors when they appear. But this doesn’t keep me from spending time with my grandkids–I have five–and working part-time providing after-school care.

I come to Fox Chase so much that I feel I know all the nurses in preop and anesthesiology. One of them even asked me if I was getting my frequent flier miles here! I have so much respect for Dr. Chen because he keeps me going. He is such a pleasant guy who is always very calm. And his staff can never do enough for me and my wife when we are at Fox Chase.

If I knew someone who found out they had cancer, I would tell them to seek out the doctors at Fox Chase because cancer is their entire focus. The whole staff is absolutely committed to all their patients.