Joe Kline: An Accident Leads to a Kidney Cancer Diagnosis 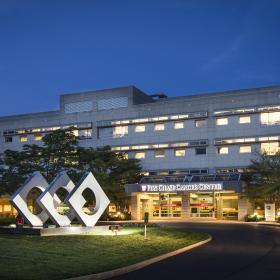 “Throughout this experience, we were so impressed by everyone at Fox Chase. From the doctors to the nurses to the cleaning staff, every single person knew their job and worked together. They were wonderful.”
‐Joe Kline

My journey with kidney cancer actually started when I fell in my driveway and injured my eye. I had to go to the hospital for treatment, and they gave me anesthesia before stitching up the eye. After they sent me home, I had trouble urinating.

The doctors said it was probably a side effect of the anesthesia. But a couple of days later, when I had to go back to the hospital for a follow-up procedure, it hadn’t gotten better. By then, my bladder was so full I felt like I would explode.

A scan showed some kind of blockage, so they put in a catheter. That relieved some of the pressure, but I started bleeding—a lot. It was scary. I was losing so much blood that they rushed me to the ER, and eventually, I was admitted to the ICU.

I had no idea there was a problem—I’d had no symptoms or discomfort whatsoever. At that point, I was still focused on repairing the eye, but the doctor said no, we have to treat the kidney first. He said most of the time the kidney has to be taken out.

They wanted me to stay at that hospital, but Elly and I said, “We’re going to Fox Chase Cancer Center.” We knew Fox Chase has a really good reputation; everyone speaks very highly of it. Plus, my brother was treated at Fox Chase, and he received excellent care.

We felt we were in good hands from our very first phone call. At many hospitals, you really have to advocate for yourself, be persistent, make sure people call you back. At Fox Chase, they took care of everything. It takes so much of the stress off of you, especially for a support person like Elly.

We got in to see Dr. Rosalia Viterbo, a urologic surgical oncologist, right away. At this point, the mass on my kidney was very large, about four inches across. Dr. Viterbo moved fast. She expedited everything—all the scans, the tests—so I could get treated as soon as possible. I think she pretty much knew from looking at it that it was cancer and that the kidney had to come out no matter what.

Six days after our first meeting, I went into surgery.

I felt confident. Usually, I’m afraid of doctors and hospitals, but at this point, my attitude was, “Just knock me out and do what you’ve got to do.” I’d been through a lot, and it was like my emotions just flipped a switch. Plus, I trusted Dr. Viterbo because she has a phenomenal reputation.

She did the procedure robotically, which makes things easier for the patient. It’s something that she specializes in and is well known for. She took out the whole kidney. After the operation, she came into the room and said the mass was unbelievable. “Normally, an adult kidney should about the size of a grapefruit, but yours was the size of an infant,” she said.

Despite that, I had a quick recovery. The operation was on Wednesday and I was released on Friday. I was flabbergasted. There was almost no pain. After surgery, Dr. Viterbo said she was pretty confident they got everything, and pathology confirmed it a few days later.

Moving On With One Kidney

Was I happy to hear that news? Oh God, yes. But actually, everything happened so quickly, and there was so much else going on, that the cancer and surgery kind of seemed like an afterthought. I mean, I know it was serious, but I was still kind of focused on my eye and worried about restoring my sight. But of course, Elly and I were relieved.

Now I’m feeling good. I can’t tell that I’m missing a kidney. I’m just moving on with my life.

Elly and I run the family business, an electronic communications company. I build sound systems for commercial applications, and she runs the business side of things. When I’m not working, I enjoy spending time with my family—my son and daughter and my three grandchildren.

Throughout this experience, we were so impressed by everyone at Fox Chase. From the doctors to the nurses to the cleaning staff, every single person knew their job and worked together. They were wonderful.