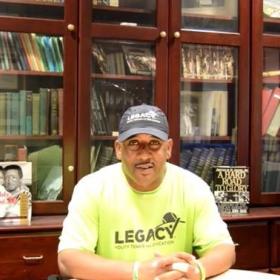 “I’m getting back to coaching. I started teaching lessons again less than two weeks after my last radiation treatment.”
‐Charles "Cha" Goods

I’ve been a tennis coach for nearly 17 years, the last dozen at Legacy Youth Tennis and Education in Philadelphia. I run group clinics and offer private lessons. I specialize in movement and footwork training, as well as video-based training. My students range from kids as young as five to professional tennis players. I’m an active coach. When I teach my students how to do something, I want to show them I can do it. They’re amazed at how good I am!

I’m 57 and my son Christian recently had his first child—a little girl named Navy—who made me a grandfather. Since I’m a parent too, I get pretty close with the parents and families of the kids I coach at Legacy. In fact, the father of one of my students became my primary care doctor.

In early 2020, my doctor told me he was concerned about the high prostate-specific antigen level in my recent blood work. He referred me to an oncologist at a local hospital. The oncologist examined me and recommended a prostate biopsy. Then the pandemic happened. Not only had my world turned upside down at the prospect of prostate cancer, but the entire world had turned upside down due to COVID-19.

Between the pandemic and an issue with my health insurance, my prostate biopsy was postponed until September. I spent eight months in limbo, waiting out a pandemic while wondering if I had cancer.

Finally, I had the biopsy, and it confirmed I had prostate cancer. My oncologist recommended a prostatectomy, surgery to remove my prostate. I was concerned about the potential side effects of surgery, such as urinary incontinence, and how they could impact my ability to coach tennis. When I’m on the court, I have to be 100% Coach Cha—it’s almost like a performance. I couldn’t let anything pull my mind away from the students I was coaching.

Also, I’d been through some pretty serious medical procedures before, including major colon surgery and an operation to put stents in my heart. I knew how tough it could be to recover from major surgery. But I’d never gotten a second opinion before; that just wasn’t something we did in my family. So I planned to move forward with the surgery.

Then an old friend reached out with a tennis question. In the course of our conversation, I mentioned my cancer diagnosis. He recommended I check out Fox Chase Cancer Center.

Within days, I had an appointment for a second opinion with Alexander Kutikov, a surgical oncologist. Dr. Kutikov met me at the main campus of Fox Chase in between surgeries—he was still wearing his scrubs—but he didn’t rush me at all. Even though he’s a surgeon and loves doing surgery, Dr. Kutikov said he wouldn’t recommend surgery for me. This changed the game completely.

Radiation Therapy Instead of Surgery

Dr. Kutikov referred me to Eric Horwitz, chief of radiation oncology, and we had a telemedicine appointment the very next week. Dr. Horwitz agreed with Dr. Kutikov and recommended radiation to treat my prostate cancer. In discussions with my doctors, and in my own research, I learned that I had the same likelihood of success with radiation as I did with surgery, but without the possibility of the surgical side effects that worried me.

In consultation with Dr. Horwitz, I elected to have five radiation treatments over three weeks. My treatment began at the very end of 2020 and was completed by the second week of the new year. I’ll find out if I’m cancer free when I get follow-up blood work in April. In the meantime, I’m getting back to coaching. I started teaching lessons again less than two weeks after my last radiation treatment.

I’m also considering a career change to work in healthcare. After losing both my mother and older brother in 2019, both of whom I had taken care of for many years, I’d been thinking about what I wanted the rest of my life to look like. Then I went through my cancer journey.

My own situation with cancer, as well as my experience with hospice for my mother, inspired me to think about giving back by working in healthcare. I’d love to work at Fox Chase and be part of the team that impressed me from beginning to end.