For more information about studies or to inquire about eligibility,
call 215-214-1515 during normal business hours. 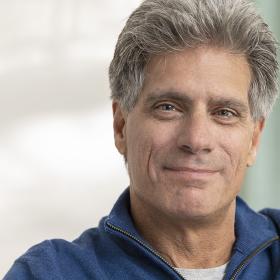 Fox Chase didn’t just offer me treatment. They put me in a position for success.
‐Barry Taitelman

Becoming a grandfather was something I had been looking forward to for years. But just before I learned that my daughter-in-law was pregnant, I was diagnosed with Stage 4 kidney cancer. Instead of the overwhelming joy I had been anticipating, I was wracked with fear. I couldn’t bear the thought of getting to know my grandson and then not getting to be there to watch him grow up.

In the fall of 2015, I felt the healthiest I had in years. I had started a new diet and was losing weight, which I was thrilled about. Although the diet may have been working, the weight loss would turn out to be a symptom. When going to the bathroom at work one day, I noticed blood in my urine. This had never happened before, so I went directly to my doctor, who referred me to a urologist. The urologist sent me for a scan, which revealed a 12-centimeter cancerous mass – about the size of a grapefruit – growing on my left kidney. I was stunned.

Finding a Plan of Action

Fortunately, my urologist had taken action after seeing my scans. Before I even came in for my appointment, he had contacted Dr. Kutikov at Fox Chase Cancer Center and made me an appointment with him for the following week. I didn’t know anything about kidney cancer or who to go to and wanted to make sure I was being referred to the best. When my doctor told me he sends family to Dr. Kutikov, I knew I was in good hands.

Walking through the doors of Fox Chase, I felt like I was in the right place. Dr. Kutikov had already reviewed my scans and had a surgery time set up for me the following week. He took the time to explain everything to my wife, Marsha, and me, even going so far as to draw pictures to show me what he was going to do.

Because my cancer had metastasized to my pancreas, spleen, and lungs, an additional surgeon joined my care team. Together they decided that a traditional surgical approach was better than a robotic approach, and that turned out to be a good decision. During surgery, they found that the cancer had spread to my colon and diaphragm, as well. During a nine-hour surgery, they removed my kidney and spleen and parts of my colon, diaphragm, and pancreas.

Recovery was intense but the nursing staff knew exactly what to do and took exceptional care of me. They knew how to help me cope with my recovery and exactly what I could expect as I healed, which gave me comfort and took away some of my anxieties. They even knew the best ways to get me out of bed without aggravating my wound and just how to lift my spirits. Everything was tailored to helping me get better.

A Setback, Then A Breakthrough

In January 2016, after three months of healing, I began an eight-month course of chemotherapy under the care of Dr. Geynisman. While the chemo reduced the size of my tumors and kept them from growing, it wasn’t getting rid of them and the side effects were harsh. When the cancer started growing again, we discussed the options and Dr. Geynisman proposed that I enroll in an immunotherapy trial.

Just to be safe, I decided to go to a well-known hospital in New York City for a second opinion, and the doctors I saw there agreed with the doctors at Fox Chase 100 percent. Knowing that the plan was my best option, I began the two-year trial. The treatment has worked so well that I now have no evidence of disease. I’ll always need to be monitored, but now I can focus on the things that matter most to me.

When I was first diagnosed, I worried about making plans for the future. I was hesitant to get too close to my grandson. I didn’t want to buy anything new because I wasn’t sure I would be around to enjoy it. I turned 60 two weeks after my surgery, but didn’t want to celebrate or have a big party. Now, my grandson is a great joy in my life and my whole outlook is toward the future. I now also have a beautiful granddaughter, Annalee Rose, and another grandson, Jesse, who are both lights in my life.

I used to golf when I was younger, and picked it up casually again when I was sick. I joined a country club and have started playing more – and I’ve gotten a little bit better. I even got my grandson Enzo his own set of plastic clubs. I’m looking forward to the day we can hit the links together.

I’ve enjoyed spending time with my family and traveling the world with Marsha. We’ve traveled all over Italy, and even took a cruise in the Mediterranean Sea! My sons have always been avid travelers and I’ve sort of lived vicariously through them. It feels great to be able to have some travel stories of my own.

I also had amazing support from my friends, family, and workplace, which helped tremendously with the stress and fears I was experiencing. Being able to focus on my treatment and getting better instead of worrying about work was an enormous relief. And my friends and family were there at every turn, coming to doctor’s appointments and keeping me company on days I didn’t feel well enough to leave the house.

The doctors at Fox Chase have given me my life back and I couldn’t be more grateful. Every question I asked, they answered with all the details. Even though they were the experts, they made sure I felt included in forming my treatment plan. My team was supportive when I decided to seek a second opinion elsewhere, and when I was ready to enroll in the clinical trial at Fox Chase, they made the process as easy as possible. Everyone at Fox Chase from the doctors and nurses to the support staff made me feel comfortable and welcome at a time when I felt most vulnerable. They care about their patients above all else and it truly shows.

Fox Chase didn’t just offer me treatment. They put me in a position for success. The way they approach everything here gave me the impression that I did have a chance, even though I wasn’t sure at the beginning. With a diagnosis of Stage 4 kidney cancer, I knew the odds were stacked against me. Coming to Fox Chase gave me a world of options. I don’t know what the future holds but I’m looking forward to finding out.