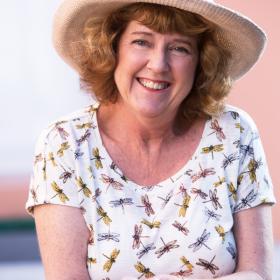 "Fox Chase made it possible for me to return to the things I love."
‐Valerie Sherwood

I grew up in beautiful, sun-soaked Bermuda, and while I loved island life, it meant my skin was exposed to a lot of UV radiation at a time when we didn’t know how important it was to protect our skin. In my 20s I was more careful, but it wasn’t enough. In the summer of 2017, at age 58, I was diagnosed with malignant melanoma.

As my father had had skin cancer, I decided about 10 years ago to see a dermatologist regularly. The odd mole was removed here and there, but they always tested negative. In July 2017, I was shocked when my doctor reported that a tiny mole removed from my upper right arm was malignant and that I would need surgery.

Bermudians who need complex medical care travel to cities on the East Coast just two hours away. My dermatologist recommended Fox Chase Cancer Center and I got an appointment with Dr. Sanjay Reddy. My sister and I arrived in Philadelphia on September 26, 2017.

I was glad to have my sister with me as support and a second set of ears during appointments. We arrived early to register greeted by pleasant and kind staff. I was pleasantly surprised to find the forms I had to fill out had my holistic wellbeing in mind, asking how I was feeling both mentally and physically.

I met first with an intern who outlined what we knew so far – I had a superficial malignant melanoma that had gone to the third level. There were choices to be made regarding my treatment, and she went over each option. I didn’t want any chance of the cancer spreading, so I decided in addition to the radical incision to also have a lymph node biopsy. This would increase my chances that I would go home cancer-free.

After talking with Dr. Reddy about my treatment options, he could see how anxious I was and offered to arrange the surgery for just two days later. He explained in detail, even going so far as drawing what the incision would look like so I could get used to it. We joked that my incision would soon look like a “shark bite” like anyone on an island may have—even though sharks aren’t really a problem in Bermuda. Dr. Reddy was confident and reassuring, which put me at ease. He gave me the control to decide my treatment options and made me feel as though I wasn’t being talked into anything. I had all my pre-op tests that same day, and the results were sent electronically so I could see them quickly.

When I arrived for my procedure, the staff prepped me immediately, easing my anxiety. I appreciated how much attention to detail the staff took in making sure their patients are informed. The surgery went well, and apart from one or two stitches coming to the surface which my dermatologist dealt with, I had no complications afterwards. My sister found the new surgical waiting suite helpful as it allowed her to monitor my progress in real time. Having arrived at 7 A.M, I was out of the center by 4 P.M. with a scheduled follow-up appointment 10 days later. We extended our stay in Philadelphia to accommodate my follow-up appointment.

I was careful about my movements after the surgery, but soon found I could dress myself, and walk and move around. My sister and I had some very enjoyable days in Philadelphia. We found plenty of good restaurants with healthy food options. We particularly enjoyed Peddlers Village, home to 60 specialty shops. My sister found a great book about the health benefits of different spices. We also found a hat shop there, and bought UV screening hats with wide brims.

At my follow-up appointment, the first thing Dr. Reddy told me was that I was clear. I felt both relieved and thankful I had been able to travel and be treated at Fox Chase. I returned home to Bermuda the following day, and rested for a week before returning to work. When you are given a cancer diagnosis of any kind, you wonder if you will ever have a normal life again, and this was the real gift I received from Fox Chase. I was thankful to return home to my work, cats, and my son, knowing I was cancer-free.

Returning home also meant I could finish the book I had been writing; Bermuda Cat Tales, which will be on the shelves for Christmas. I have fostered hundreds of rescued kittens, and am a singer-songwriter with two CDs of original songs. I take my health seriously, exercising daily by walking, swimming, or going to the gym, with the occasional cycle or kayaking session. These are done early in the morning before the sun is up, or when the sun has gone down. I now take even more precautions to protect my skin, such as getting tinted windows for my car and always wearing sunscreen and a hat.

Nine months later, my four inch long scar is a settled pink line and there is a small dip on my arm. With just a dab of foundation, no one even notices it. I urge others to see a dermatologist as they take photographs of moles and skin so they can notice changes you might not. For those diagnosed with cancer, my advice is that there are highly skilled, caring, healthcare professionals ready to help you through and it’s important to find those people. Out of a bad situation, I found two silver linings. My journey to Fox Chase allowed me to spend quality time with my sister; (we’re off to Portugal on a river cruise later this year) and I got my whole life back.

Fox Chase made it possible for me to return to the things I love. Everyone was organized, kind, and thoughtful, which helped put me at ease. Dr. Reddy and the entire team were more than accommodating, helped navigated the process of being an international patient and mitigated the stress I felt about my diagnosis. I am glad I traveled to the United States for my care, and I’m thankful I found Fox Chase.