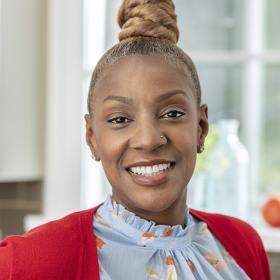 "Looking back, I know I made the right choice. I wouldn’t have gone anywhere other than Fox Chase."
‐Tijuana Smith

I discovered a pea-sized lump in my right breast at age 36, shortly after my father died. My father had been diagnosed with Hodgkin’s lymphoma at age 19, colon cancer while in his 40s, and then esophageal cancer, which took his life at age 56. After his funeral, I felt I would get cancer one day, and as the oldest of 3 siblings, I thought I would probably be first. I was right.

It was the summer of 2007 when my father died, and I was working a full-time job and taking care of my 3-year-old daughter and 14-year-old son. During that summer, I had also been helping my younger sister take care of our father.

When I felt the lump after his funeral, I scheduled my first mammogram, followed by a biopsy at a nearby hospital. The biopsy confirmed breast cancer, and the doctor recommended surgery. As soon as I got the diagnosis, I knew I wanted to go to Fox Chase Cancer Center for a second opinion.

At my first appointment, I met with a medical oncologist, surgical oncologist Dr. Richard Bleicher, and plastic and reconstructive surgeon Dr. Sameer Patel. The doctors had a great attitude and were very knowledgeable. There was no question in my mind that I would be staying at Fox Chase for treatment.

At my age, the thought of losing a breast was devastating, so I opted for a unilateral mastectomy with reconstruction. After hearing from Dr. Patel about all the options, I decided I wanted the free TRAM flap procedure, which would use tissue and fat from my stomach to build a more natural-looking and natural-feeling breast.

My then-husband and I returned to Fox Chase several weeks later for my surgery, and after surgery I stayed in the hospital for 5 days. The nurses were so helpful because I couldn’t do much for myself. They helped make my stay as comfortable as possible.

After I recuperated, I met with my oncologist and began chemotherapy. The doctor was extremely responsive about managing and controlling my nausea and other side effects. During that period I returned to work part time. I needed to stay busy and productive, and work was the perfect answer.

Back to Feeling Strong

When the chemotherapy regimen was complete, I returned to full-time work and resumed my workouts at the gym. I lifted weights to build my upper arm strength, which had been weakened by the treatment. I also joined the breast cancer support group at Fox Chase. It was uplifting to meet and talk to women who are veteran survivors of breast cancer.

Dr. Patel’s reconstructive surgery made me look even better than before. That’s how good he is. Preserving my physical appearance was very important to me because of my age. Looking back, I know I made the right choice. I wouldn’t have gone anywhere other than Fox Chase.