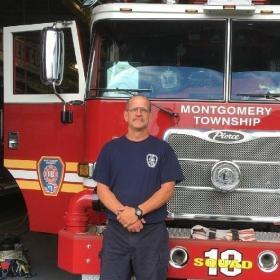 “Everyone, from the custodial staff all the way up to the head nurse on the third floor and the nursing staff at the treatment center, were all impeccable."
‐Robert Roy

I have been an EMT and a firefighter for 35 years. It started out as a hobby when I volunteered in high school, and it turned into a career. Thankfully, the job has kept me in good health and helped me remain in shape.

However, through my job, I had seen people at the end stage of their cancer journey. Whenever I saw a case like that, a little thought popped up in the back of my mind that it could be me one day. So, when I was diagnosed with colon cancer, I was nervous.

There weren’t a lot of initial signs of my cancer. I had started to lose weight, but I thought that was because I had recently cut out junk food, was running, and had started to go to the gym twice a day. Then, one day at work in September of 2019, I got a bone-chilling feeling and turned as white as a ghost.

When I went to my local hospital, they diagnosed me with dehydration and a possible infection before ordering a CAT scan. When they saw my results, they were concerned. They scheduled me for a colonoscopy, and it was confirmed that I had colon cancer.

Around Halloween, I went in for surgery at my local hospital, but they found out the tumor was too big and involved the blood flow of my small intestine. The doctor backed out of the procedure and gave me a colostomy bag. At that point, they discovered it wasn’t just colon cancer, but it was a colon cancer that couldn’t be operated on and was likely incurable. Hearing that news was the moment I decided to go to Fox Chase.

At Fox Chase, I saw Dr. Rishi Jain, a medical oncologist who scheduled me for immediate blood work and a PET scan. He confirmed it was colon cancer and started me on chemotherapy right away in an effort to decrease the size of the tumor. He was hoping to make it operable and ultimately curable.

My first three treatments consisted of a four-drug regimen. It was a three-week rotation, so I would sit in the chemo room chair for seven hours one day, come home with a pump for the next two days, then go for a week without treatment before going back to Fox Chase again. During that time, for about two weeks, I experienced neuropathy in my feet, hands, and when I drank cold fluids, but that was the only side effect.

My last three treatments were a five-drug regimen. By the end of my sixth round of chemo, I went for more blood work, and my CEA tumor marker had dropped from 28 down to three!

That was when I met with Dr. Jeffrey Farma, a surgical oncologist. He was very upbeat and positive about the outcome, and that made me realize that he really knew what he was doing.

I waited five weeks after finishing chemotherapy before going into surgery. The funny part about the whole thing was that Dr. Farma scheduled my surgery for March 13, which was Friday the 13th. I said, “Really doc? This is what you are going to do to me?” We had a good laugh.

When I was in the prep area before surgery, everyone came to visit me—Dr. Farma, his fellow, and my anesthesiologist. They were all very encouraging, and Dr. Farma let me know that during the surgery, he was also going to be able to reverse my colostomy.

A Clean Bill of Health

I woke up Saturday morning with nurses checking on me every ten minutes. By late afternoon, they had me up and out of bed. That night, I was able to walk around my room and on Sunday, I was walking down the hallway.

I ended up meeting with the Risk Assessment Program team, and they discovered I was positive for a cancer mutation called ATM. This likely put me at risk for my colon cancer, and it also potentially increases my risk for pancreatic and prostate cancer. Because of this, I am now enrolled in a research study for that.

Back to Helping Others

All of the individuals I interacted with at Fox Chase —from the custodial staff all the way up to the head nurse on the third floor and the nursing staff — were impeccable.

I had a great supportive group of immediate family, neighbors, community members, and individuals at Fox Chase. I have three boys, and without having to ask, people from my church group and neighbors were running errands for my them, cooking us food, shoveling our walkway, and helping with whatever else we needed.

Throughout my chemotherapy treatment, I was able to keep walking at least three miles a day. And now, I am back to work full time as an EMS deputy chief and a part-time firefighter. I take pre-hospital 911 calls (among other duties) and assist with commercial building inspections for fire safety issues.

I work 12-hour shifts for EMS, and on the days that I am not there, I am working for the fire department for another eight hours. I guess you could say I love my job!

I am thankful for Fox Chase for many reasons, but especially that they helped me get back to doing what I love.