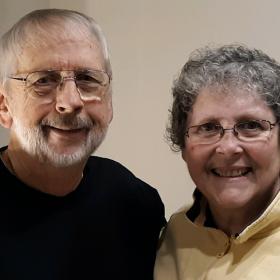 Fox Chase was the first place I went where I felt like I had options.
‐Paul Kotkiewicz

With more than 40 years between my first and second cancer experiences, I have personally experienced the incredible advances in treatment that cancer researchers have made over the decades. After a very long ordeal when I was originally diagnosed, my family and I expected more of the same the second time. Thankfully, we found Fox Chase Cancer Center and Dr. David Chen instead.

A Clinical Trial that Lasted a Lifetime

My cancer story began in the summer of ’69. At 23, I worked for a family business in Bristol, PA, supporting my wife and daughter. We were a young family with a bright future. However, one day I developed bruises all over my body that would not heal.

My doctor diagnosed me with acute myeloid leukemia and sent me to receive treatment in Buffalo, New York. At the time, cancer treatment was a long and grueling process that often involved intense side effects. I was put on a six-year clinical trial for chemotherapy, with 10 years of follow-up treatment.

From the start, the doctors in Buffalo admitted my prognosis wasn’t great. They said that if the cancer didn’t kill me, the toxicity of the treatment might eventually. I actually did die once – on February 2, 1970 – but was revived. I spent long periods quarantined in a sterile room. The nurses who brought me food had to put on HAZMAT suits before entering my room.

I got to know every drop of water that went over Niagara Falls because I could see it from my hospital room. After three months, my cancer went into remission and the doctors in Buffalo said I could go home. However, I would still have to make the 380-mile trip between Bristol and Buffalo every other week for bone marrow tests and treatment. We flew when we could, but it was expensive. Mostly, my wife and I got to know the roads between Philadelphia and Buffalo on the six-hour drives, often through snow.

A Second Chance and a Second Cancer Diagnosis

In 1985 I was finally free from treatment, but with little guarantee about how long I would live. But I did live, and for the first time in a long time, my life went back to normal.

In 2012, I was recently retired and enjoying time with my grandkids when I found blood in my urine. By then I had been cancer-free for 42 years. I went to a treatment center, where they ran 10 tests on me. The tenth and final test revealed that I had ureter cancer.

This second cancer diagnosis hit my family very hard. My world completely stopped. My wife, daughter and grandkids were devastated. Knowing how difficult the treatment had been the first time, we were all unsure if I could go through it again. Initially, the doctors at the local center recommended a nephrectomy, surgery to remove my kidney, but I didn’t like that option.

My niece worked at a cancer center nearby, so we went there for a second opinion. Their conclusion was the same. We sought a third opinion from another cancer center in Philadelphia, and they recommended the nephrectomy, too. I really wanted to keep my kidney, but it seemed like that wasn’t an option.

Finally, I came across a clinical trial by Dr. Robert Uzzo at Fox Chase Cancer Center. At the time, Fox Chase was one of the only hospitals in the country performing robot-assisted surgery. Learning that cancer treatment in 2012 was miles better than the treatment I got 42 years before put my wife and me at ease.

Once I got to Fox Chase, I was referred to Dr. Chen. I really appreciated Dr. Chen’s straightforward, honest approach when telling me my options. He was clear and thorough in describing what each option entailed and how he thought each procedure would go. Beyond his bedside manner, I also found him a very cool and down-to-earth person. His nurse practitioner, Sue, also played an integral role in my treatment. She was always there to keep my wife and me calm about the whole process.

Fox Chase was the first place I went where I felt like I had options. They understood that I didn’t want my kidney removed and were capable of completing the surgery with their cutting-edge, robot-assisted procedure. Having gone through cancer treatment in the 70s and 80s, it was extremely reassuring.

I received chemotherapy first—three doses, each six weeks apart—and then had surgery that removed the cancer and preserved my kidney. Beyond a period of recovery, my life went back to normal again: retirement, grandkids and all.

Through it all, I always told myself to keep moving. It’s the same mindset I have today, now seven years after my second cancer diagnosis and treatment. I still go back every six months for checkups, but I can say that I’ve had my life back for some time now. Both times I went through cancer I kept thinking ahead. I wasn’t always focused on what I was going to do the next day. Sometimes, it was what I was going to do in the next 30 minutes. But I was always going forward.

I am thankful that Dr. Chen and his team gave me the chance to keep going.