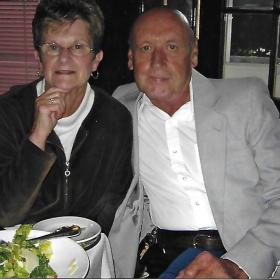 Despite the outlook, Dr. Chen offered only words of encouragement and positivity.
‐Joseph Trunkwalter

Like most men, getting regular checkups is not at the top of my list, but my wife has always made it a priority. And I’m glad she did because about seven years ago, it saved my life.

I was past due for a wellness checkup and went in expecting no problems like every other time. However, my blood test revealed an elevated PSA count. PSA, or prostate specific antigen, is a substance produced by the prostate gland. A regular PSA count is anywhere between zero and four. In the couple of months since my previous visit, my PSA rose from four to eight—not what I wanted to hear. My primary doctor recommended I immediately make an appointment with a urologist, which I did the next day.

Thinking back to this time, I can’t help but be amazed at how fast everything happened. A week after the visit to my primary care doctor, I was having a prostate exam and biopsy done at the urologist. My next visit was for the results, and again they were not what I wanted to hear: I was diagnosed with “very aggressive” prostate cancer.

My cancer scored a 10 on the Gleason scale, meaning it was the most aggressive form it could be, and would spread quickly if my doctors didn’t act fast. The urologist sent me to a radiologist in New Jersey. I was so stunned that I ended up doing whatever I was told. When I got to the radiologist he ran every test in the book: MRIs, X-Rays, blood tests, you name it. The radiologist recommended brachytherapy, in which small radioactive seeds are implanted into the prostate to deliver radiation therapy. I was days away from receiving mine when the doctor discovered something behind my prostate.

“Joe listen, we’ve got a problem,” I remember the radiologist saying to me. He had sent my scans to some colleagues, who determined it was a massive tumor. How massive? My prostate was the size of a walnut and the cancerous mass attached to it was the size of a softball. The radiologist offered to help me make a decision on treatment. I could still undergo radiation, but the cancer might still spread rapidly. After some prayer with my family, I chose surgery. The radiologist then directed me to Dr. David Chen, a surgical oncologist specializing in genitourinary cancers at Fox Chase Cancer Center.

A Speedy Surgery and Recovery

Dr. Chen called us the next morning to arrange a time to meet. My first impression was that he was an extremely optimistic person. He had a very calm and confident outlook about my treatment. I would undergo a minimally-invasive, robotic surgery and Dr. Chen made sure my family and I knew everything he would do before the operation. The whole thing moved so fast. I went in at noon on Aug. 6, 2012 and was home by noon the next day. I was even able to enjoy martinis with my family that afternoon.

I was also surprised that the only scar I’m left with from the entire five-and-a-half hour operation is one right below my belt line, smaller than my navel. I have tremendous respect for Dr. Chen for being able to do this so efficiently, yet with such care. I found out later that before my surgery, he briefed my family on my condition and the outlook for the surgery. Much later they told me that he said the odds were against me and I may not make it. Despite that outlook, Dr. Chen offered only words of encouragement and positivity. With that level of honesty and care for my wellbeing, I’d want him as my brother.

The entire process from diagnosis to surgery took four months. In that time, I followed every doctor recommendation I was given—that included coming to Fox Chase Cancer Center. The quick action of my primary care doctor, urologist, and radiologist led me to Dr. Chen.

A Return to the Things I Love

Now, six-and-a-half years free of cancer, I still go back to Fox Chase every six months for a checkup. At my first appointment after surgery, my PSA was zero, and it hasn’t risen since.

I’ve always loved camping, and in 2010 bought a 36-foot camper so my wife and I could take trips wherever and whenever we wanted. Every week, we take it to the Poconos. I consider myself lucky to continue doing that because of the treatment I got from Dr. Chen and the well-qualified staff at Fox Chase. My experience there saved my life.