The U.S. Preventive Services Task Force (USPSTF) published a new recommendation that men ages 55 to 69 should decide for themselves whether to undergo a prostate-specific antigen (PSA) test after discussing the potential benefits and harms with their doctor. 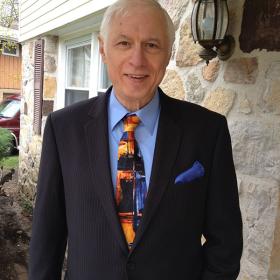 “I felt that I was in the hands of a knowledgeable and extremely competent surgeon at a superior facility.”
‐Ed Summers

I am 75 years old and was born and raised in Philadelphia. My wife Janet and I have two grown children. Before retiring six years ago, I was a judge in the Philadelphia Court of Common Pleas for over 27 years. Since then, I have enjoyed reading up on current events and maintaining my personal health through exercise and nutrition.

Although I don’t typically follow sports, I played football in high school and college and wrestled professionally for the Worldwide Wrestling Federation, now the WWE, from 1967 to 1969 under the name “Sammy Rubin.” As far as I know, I am the only professional wrestler ever to become a sitting judge.

In the summer of 2018, a routine doctor’s visit set the stage for a startling discovery: prostate cancer. My prostate-specific antigen levels, also known as PSA, had risen to a 5.1, then 5.5 at the next checkup. A healthy PSA level is below 4, so my doctor knew something might be wrong. After getting a biopsy (that found prostate cancer), it was found that my Gleason score was 3+4, which meant that my cancer had a moderate chance of spreading.

While this was difficult news to receive, it was not a death sentence. The doctors at the first hospital I went to gave me three options: I could either wait and watch carefully, undergo radiation treatment, or have my prostate removed. Before I made my decision, I sought a second opinion from Fox Chase Cancer Center at the urging of my cardiologist. After doing research, I decided to consult Dr. David Y.T. Chen, a urologic oncologist there.

Nipping it in the Bud

Although the fatality rate of my cancer was relatively low, I felt more comfortable nipping it in the bud. Presented with the same three treatment options by Fox Chase, I finally decided to undergo robotic surgery (which, as I discovered after research, would yield a 15% higher survival rate).

I could not fully enjoy life with the lingering thought of prostate cancer, so the wait-and-see approach was not really an option for me. I cannot overstate the amount of research I put into my decision to have surgery. Whether for legal decisions or diet and exercise info, thorough research has always been a major part of my life.

My wife Janet knows this better than anyone. When we shop together, she knows I will go out of my way to compare the prices and attributes of a certain appliance, and a final decision might take weeks. I went over my PSA numbers and Gleason score again and again and related them to my research.

Everyone has some anxiety about operations, but my biggest concern was urinary incontinence afterward. That’s the one thing I couldn’t live with. I had endured a few days of incontinence due to a previous unrelated procedure, so I knew it was something I wanted to avoid if at all possible.

Thankfully, my mind was put at ease after Dr. Chen and his team took the time to explain the unlikelihood of incontinence occurring as a result of having my prostate removed. Because of this, I felt I was in the hands of a knowledgeable and extremely competent surgeon at a superior facility.

To my relief and Janet’s, Dr. Chen said my operation was “uneventful.” I experienced gas pains in my shoulders for about four days afterwards, but thankfully, no urinary incontinence. Once the catheter was removed, and with a conscientious regimen of Kegel exercises both before and after the surgery, I was able to resume my daily activities. Just as important, I’m pleased to say that my PSA levels have been very good since my last test.

Although I have the utmost respect and admiration for the institution and staff we visited first, I am unreservedly grateful that we came to Fox Chase. At first, the decision to be treated there was mostly for the sake of convenience. However, my main reason for staying with Fox Chase was Dr. Chen and his team’s caring, considerate, and highly professional approach to my cancer.

While discussing treatment options together, Dr. Chen carefully listened to not just me, but to Janet as well. He provided thorough, unhurried explanations and often invited her comments and questions as well as mine. Janet has mentioned that, with other doctors, she often feels like she is just there to hold my coat.

Dr. Chen and his team have my unqualified endorsement.