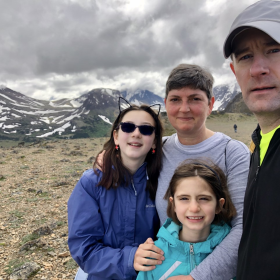 “I continue to get routine follow-up care at Fox Chase. Even when my family spent several years living in Alaska, I insisted on coming back to Fox Chase for my regular scans.”
‐Tina Pidgeon

Eleven years ago, I went in for a routine ultrasound to evaluate my pregnancy. I had no idea that the test would completely change my life and lead to a diagnosis of kidney cancer.

The ultrasound was going normally, but the tech kept looking at something on the screen in a way that was concerning. When she asked a doctor to come into the room, I knew something was wrong. I thought it had something to do with the pregnancy, and unfortunately, it did. The physician informed me that the pregnancy had failed to progress, and I was experiencing a miscarriage.

The doctor also asked if I knew that I had tumors on both of my kidneys, to which I responded that I didn’t. I wasn’t experiencing any pain or symptoms, so it caught me by complete surprise.

I left the appointment with a scheduled CT scan for that afternoon. Unfortunately, further testing confirmed that I had kidney cancer.

The whole experience was completely surreal. I received two pieces of completely life-changing, devastating information, and it was a lot to digest. I knew I needed to make decisions about my care, but it took some time to process everything that was happening.

I had tumors in both of my kidneys (which is unusual), and one of them was the size of a grapefruit. It took some time to receive an accurate diagnosis, and it wasn’t until I participated in a genetic study with the National Institutes of Health that all my tumors were confirmed to be papillary oncocytoma.

The first surgeon I went to wanted to open me up all the way and operate on both of my kidneys at the same time. At first, I was fine with that approach—I just wanted to get the tumors out of my body!

Fortunately, we had a family friend who was in a leadership role at a cancer hospital in another city. He recommended that I get a second opinion, and he specifically recommended Fox Chase Cancer Center. We took his advice, and I made an appointment for a consultation.

The first surgeon I met with at Fox Chase told me he would never operate on both kidneys at the same time. It was incredibly important to try to preserve my kidney function, and operating that way would make it difficult to do so. His surgical plan included operating first on one kidney, allowing recovery time to make sure it was functioning properly, and then operating on the second kidney.

That made a lot of sense to me, and I decided to officially move forward with him as my surgeon.

I underwent my first surgery in July of that year and the second in August. The nurses at Fox Chase were incredible and made me feel so comfortable. I was in the hospital for four days after each procedure, which was the longest time I’d ever been away from my one-year-old daughter. I was worried she’d be scared when she came to see me in the hospital, so I got a stuffed toy to give her when she visited to make it special.

After my second surgery, we learned that the first kidney that was operated on was no longer functioning. It was a devastating blow, but it made me feel even more thankful that I had gone with Fox Chase’s staged approach to the procedures.

My care was eventually transferred to Dr. Robert G. Uzzo, Chair of the Department of Surgical Oncology at Fox Chase.

About a year after my surgery, I started thinking about having another child. However, I didn’t know if it would be safe—I was an older parent and I was down one kidney. I was also worried that pregnancy hormones could trigger a recurrence of the cancer or that my body wouldn’t tolerate a pregnancy. I was very happy when Dr. Uzzo put my mind at ease.

“Don’t worry about it,” he said. “If something happens, we’ll take care of you.”

That was 11 years ago. Today, my two wonderful daughters are 12 and 9. We enjoy hiking and taking bike rides. One of my daughters plays soccer, the other plays softball, and I love helping out with their teams.

I continue to get routine follow-up care at Fox Chase. Even when my family spent several years living in Alaska, I insisted on coming back to Fox Chase for my regular scans. At first, I was coming every six months, and then every year. Now, I come every two years!

Because of my experience, I’m passionate about supporting other patients at Fox Chase. I helped develop an early pilot plan for the Patient-to-Patient Network, which matches new patients with volunteers like me who’ve been through their own cancer journey. Going through cancer treatment can be overwhelming, and there’s a lot to learn. I wanted to share my experience so that the next person doesn’t have to reinvent the wheel.

I’m so grateful for the care I received at Fox Chase, and I am so happy to give back to others who are facing a similar journey.