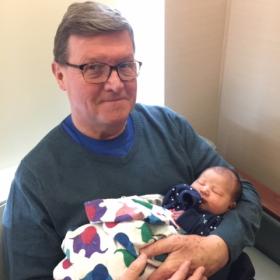 I know what to look for in a doctor and a hospital. At Fox Chase, I was reassured, cared for, and loved.
‐John Carr

In November 2012, my doctor diagnosed me with prostate cancer after testing a mass we’d been watching. It was caught during a routine physical.

The first doctor I saw attempted to treat the cancer with drugs, but they didn’t work.

At a crossroads at my local hospital, I wanted a second opinion, and after seeing an ad about Fox Chase Cancer Center I decided to do some research. Right away Fox Chase made me feel like a priority. I scheduled an appointment for December 12, 2012 with Dr. David Chen.

When I first met Dr. Chen, he made me feel as though I was his only patient. He gave me all the time in the world, which was good because I had a lot of questions. He assured me that there were plenty of treatment options. We discussed radiation, robotic surgery, and a radical prostatectomy – the removal of my entire prostate. I was overwhelmed with all of the implications of each treatment option. Dr. Chen told me to go home and take time to think about it.

Alone in the Crowd as Surgery Loomed

The holidays were quickly approaching and I wanted everything to be as normal as possible. I couldn’t accept what was happening to me, so I kept my cancer a secret from my wife, daughter, and two sons. I was ashamed of potentially needing their help, and didn’t want to have to rely on anyone. I scheduled my robotic surgery for February 11, 2013 without my family knowing.

Though my surgery was scheduled, I worried about the future. While everyone around me celebrated the holidays, I was heartbroken to think it could be my last Christmas. I took extra care when packing away the Christmas decorations, labeling and dating each box. My wife even said that I was being awfully scientific about the packing this year, but I didn't have the heart to tell her it was because I wanted her to know where everything was if I wasn't around to unpack it next year.

By the end of January I felt ready to tell my family about my diagnosis. I could only bring myself to tell my wife and daughter, not my sons. At first they were angry that I didn’t tell them sooner, but they were ready to take the journey with me.

On the day of the surgery, my wife and I drove to Fox Chase at 4:30 A.M. From the moment we arrived, I felt that everything was going to be alright. Dr. Chen had been very reassuring and I was confident in his work. He understood me. In addition to the incredible staff, I was comfortable because I grew up nearby—Fox Chase felt like home.

My surgery went well, and afterward my nurse stayed with me the entire afternoon. The medical team cared for my family just as well as they took care of me. While I was in recovery, Dr. Chen talked with my wife and daughter about how the surgery went and what the next steps were. He stayed with them, offering comfort and reassurance until he felt they were ready for him to go.

As recovery went on I began to have a lot of pain and discomfort, but the nurses made me feel as comfortable as possible. On Wednesday afternoon I was walking, and by Thursday morning, I was getting ready to go home.

While I was recovering, a volunteer from Fox Chase visited me and gave me a pillow that said “I need a hug.” We spoke about religion and other topics to help ease my mind. I still keep that pillow on my bed at home as a reminder of my cancer experience.

Graduating to the Survivors’ Clinic

I enjoyed returning to Fox Chase for checkup appointments because of the way I was greeted. I was always met with, “Oh good, you’re here!” or, “Good to see you again!”

On my most recent visit, Dr. Chen told me that he was so pleased with my follow-up scans, that we scheduled our next visit for three to five years in the future. I will never forget his words when he said I made it— he congratulated me on joining the survivor’s club.

I’ve been dealing with diabetes since 1999, and I have been around plenty of doctors in my lifetime. I know what to look for in a doctor and a hospital. At Fox Chase, I was reassured, cared for, and loved. Dr. Chen and his staff established an incredible relationship with me right from the beginning.

A couple of years after my experience, a colleague was diagnosed with prostate cancer, too. I insisted that he see Dr. Chen, and would tell anyone else the same thing. Because of Fox Chase, I got to unpack my “scientifically organized” Christmas supplies that next year, and several years after that.