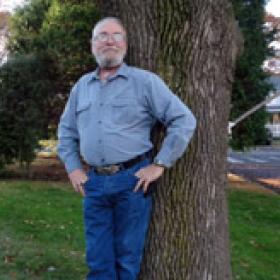 "I knew the cancer was coming back."
‐Stephen Meier

I’m the kind of person who isn’t prone to panic. Panic just causes confusion. So, when what began as soreness on the right side of my throat turned out to be cancer, I remained calm and figured somebody can fix it. When I complained of the soreness to my family doctor, he thought there was a tumor on my right vocal cord and ordered a biopsy. He told me from the beginning he thought it was cancer.

I had already lost close family members to breast cancer and colon cancer. The treatment plan was to remove the tumor, followed by 30 radiation sessions in December 2011. Not long after I finished radiation, I started losing my voice—I knew the cancer was coming back. In November 2012, my doctor sent me for a second opinion and another biopsy at a teaching hospital in Philadelphia. That’s where I learned the tumor had returned.

The doctors were baffled by the fact that I was breathing considering I had smoked for 45 years. I was then scheduled for a total laryngectomy, which would effectively remove my voice box and take away my voice. Still, I wasn’t panicking. My attitude was, “They know what they’re doing, and they’ll take care of me.”

Unfortunately, my surgery was problematic. A muscle taken from my leg was used to rebuild my throat area, and my body rejected it. In a second surgery, surgeons utilized a pectoral muscle from my chest, resulting in a third surgery to keep the infected muscle from dying off. I contracted a dangerous methicillin-resistant staphylococcus aureus infection, which left me with open wounds in my neck. While being treated in a hyperbaric chamber to promote healing, I used an electrolarynx. Although this technology allowed me to talk, it wasn’t how I pictured myself communicating for the rest of my life. I became depressed and despondent. In the past, I had enjoyed going to karaoke with my wife, but obviously, that wasn’t something I could do. All I wanted to do was sleep.

I researched support groups for people who have had throat cancer, and with my wife by my side, I went to a support group at Fox Chase Cancer Center led by Katie Moran, senior speech pathologist, and Florence Bender, a social worker and founding member of the Speak-Easy group. As it turned out, this support group was a game changer for me.

Because of that laryngectomy support group, I fell in love with Fox Chase and decided to transfer my care over to Dr. Thomas J. Galloway, a member of the Fox Chase head and neck cancer treatment team.

Working closely with my treatment team, along with physical therapist Jenna Balaicuis, who helped me manage the effects of lymphedema, I started seeing a life for myself postlaryngectomy. I started getting information from people like myself—how they sleep at night, how they arrange their throat, and how they keep their tubes clean. I was getting a lot of answers. I got to the point that I’d rather go there than sleep. It wasn’t long before I started helping other people being treated for laryngeal cancer and offered much-needed support and information from an all-too-informed point of view.

Unlike my previous hospital experience, where I always felt like I was being herded like cattle, I feel that my Fox Chase team really cares about me. When I’m at Fox Chase seeing my doctors or talking to the therapist, I can take my time and ask as many questions as I want. The clinicians at Fox Chase are attentive to me and my needs.

Speech pathologist Katie asked me if I had considered a prosthetic device called a tracheoesophageal voice prosthesis (TEP) to facilitate my speech. I had previously rejected the option because I’d been told I’d need surgery to change it out every six months, and I couldn’t bear the thought. Katie told me she was confident she could successfully implant a TEP, and she did in 2013. My voice still doesn’t sound like it used to, but I feel that the device has given me much of my voice back. My life is different, but with the help of my team at Fox Chase, we’re making it work.