Sonia Smith: A Breast Cancer Diagnosis That Brought Her Family Closer Together 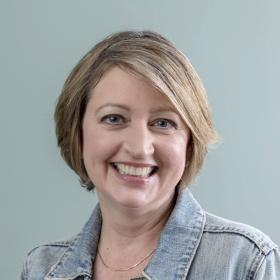 I was very busy as the Economic and Business Development Program Administrator for Bucks County, PA, when a routine mammogram in January 2011 confirmed that I had stage 2 breast cancer in my left breast. Further testing at my local hospital found that the cancer had spread to all 4 quadrants of my breast.

My son and daughter were in the 7th and 9th grade, and I wasn’t sure how they would handle the news. I confided in my partner, Stephen, who had lost his wife to a brain tumor. He and I agreed to keep my diagnosis to ourselves until we had a plan in place.

I was 47 years old and had always thought I would eventually die from a heart attack or skin cancer, not breast cancer. My mother is 1 of 7 sisters and only 1 had breast cancer, which was probably a result of her exposure to DES during a pregnancy.

I wasn’t ready to think about major reconstructive surgery at that point, and I decided I needed a second opinion about my treatment options. My gynecologist recommended that I make an appointment with Dr. Marcia Boraas, a surgeon at Fox Chase Cancer Center. Dr. Boraas was really terrific and spent time explaining my options related to mastectomy and reconstruction. She recommended that I also meet with one of Fox Chase’s medical oncologists who specialize in breast cancer.

Both doctors understood that I wanted to avoid major surgery, and they started me on a 16-week course of chemotherapy to shrink the tumor so that less invasive surgery might be an option for me.

I decided at that point to share the news with my family and my coworkers. Everyone was very supportive, and I continued to work full time, often with a baseball cap on my head. Stephen suggested that I invite a different friend each week to accompany me to chemotherapy, which was a great distraction and made the experience even enjoyable at times. Stephen brought me to my first and last appointment and was the best support person I could ask for. I was very grateful to my friends and the business community that surprised me with homemade dinners and flowers and sent notes of encouragement and funny get-well cards.

By July, the chemotherapy had worked to shrink my tumor and I was ready for surgery. Dr. Boraas honored my desire to avoid major surgery and performed a lumpectomy on 2 separate occasions, but each time the margins were not clear, meaning that not all the cancerous tissue could be removed. A mastectomy was needed.

The chief of plastic and reconstructive surgery at Fox Chase joined my treatment team and explained my options for reconstruction. I chose the TRAM flap procedure. In late September, Dr. Boraas and my reconstructive surgeon performed the mastectomy and reconstruction during the same procedure, and I stayed in the hospital for a week. The nurses were amazing and very responsive. It was recommended that I recuperate for 8 weeks before returning to work, but I got restless and worked from home and then went back to work 2 weeks early.

I adored my team, and the procedure was great because they used muscle, fat, and skin from my abdomen to create a new breast – which was like getting a tummy truck as a bonus. The breast looks perky and feels just like a real one.

In December that year, I started radiation treatment at Fox Chase Buckingham, located very close to where I live. My last day of radiation was January 10, 2012, one year to the day that I received my diagnosis. I absolutely loved working with radiation oncologist Dr. Shelly Hayes, who is really nice and runs an efficient practice. I never had to wait for an appointment.

In May 2012, I returned to my plastic and reconstruction surgeon for an uplift of my right breast so that it would look like my reconstructed left breast. Two months later, I had a nipple reconstruction, followed by an areola tattoo. My goal was to look normal whether I’m at the beach or in the YMCA locker room. I began 5 years of treatment with tamoxifen to decrease my risk of a recurrence of cancer, and I enrolled in a clinical trial to test another potential therapy to prevent recurrence.

I also joined Fox Chase’s breast cancer support group that is run by the nursing and social work department.  Carolyn Weaver and Coleen Boyd did such a great job facilitating the group, and we all supported each other. I decided to undergo testing for the BRCA1 and BRCA2 genetic mutations, and fortunately, I was negative for both.

The experience brought me closer to my children. My son and daughter participated in the Relay for Life, and my daughter and her friends organized a tag sale of clothing and books to benefit the American Cancer Society. I was so proud of my children who did this in honor of me. I can’t tell you how much that meant to me.

Following my treatment, I lost weight and began a yoga/pilates exercise program at the YMCA. I feel great and am so happy with the way I look. I encourage all women to schedule an annual mammogram. My cancer was not a detected lump. Only the mammogram was able to identify the distortion which led to the diagnosis.