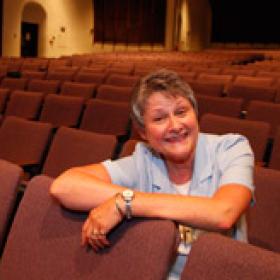 "I felt Fox Chase was the right place for me."
‐Sister Marcille McEntee

I am no stranger to miracles.  As a Sister, and Servant of the Immaculate Heart of Mary, my faith is deep and abiding.  Yet to see a miracle at work in my own life is still a special blessing.

I live on the grounds of Immaculata University west of Philadelphia, where I teach English literature, women’s studies and theater. In August, 2013, at the age of 64, I went in for my routine physical. Although I have dealt with diverticulitis in the past, I was not experiencing any unusual symptoms but my urine sample showed traces of blood. That was the only time that happened. If it hadn’t my cancer wouldn’t have been found.

After some tests, my doctor told me that I had a growth on my urethra.

My gastroenterologist performed a PET scan which revealed a rare kind of cancer, mucosal melanoma. At that point, my urologist admitted, "This is beyond me. You need to go somewhere else." Several of the Sisters in my community and an aunt had been treated at Fox Chase, so I prayed about it and did some research. I liked the team approach at Fox Chase. I felt Fox Chase was the right place for me.

My treatment team included Dr. Marc Smaldone, a urologic oncologist; Dr. Stephanie King, director, minimally invasive gynecologic surgery, melanoma specialist; a medical oncologist; and a plastic surgeon. From the moment I met them, I felt I was in the best hands possible. Dr. Smaldone is wonderful, as is his entire team. After discussion by the whole treatment team, they explained they would have to perform a cystectomy and vaginectomy.  They needed to take out practically everything including my bladder. I would be left with an ileal conduit (urostomy) to drain urine. My surgery was scheduled for October 14, 2013.

I took the news in stride. It’s hard to explain, but my view of what happens to me is based on my faith. I trust that whatever God has planned for me, I will be all right.

The surgery, performed by Drs. Smaldone and King was a success. My cancer was contained and my surgical margins were cancer-free. I can’t praise the Fox Chase team enough. Dr. Smaldone even gave me all of his phone numbers and said if I needed him I could call day or night. After two weeks in the hospital, I spent about a month in a rehab center before coming home. I really had no pain.

Dealing with my “new normal” urostomy was traumatic at first. The first time I had to change my bag, I cried and cried, I was just so upset. But I had two wonderful angels by my side to help me.  A sister in my order had the same situation because of cancer 13 years earlier, and generously helped me become used to the routine of self-care.  And Fox Chase therapist Tina O’Mara worked with me as well. She’s a marvel, the kind of person that makes you feel calm and assured; just a phenomenal person. Now it’s no big deal, just part of my weekly routine.

After I regained my strength, my medical oncologist met with me and proposed that I go on a series of Interferon infusions as adjuvant therapy to prevent disease recurrence. They were very up-front about it. My cancer is so rare and very aggressive, so there is not much data on it but Interferon has been effective with other types of melanoma. I knew they wouldn’t do anything that would hurt me more than necessary, so I agreed to do it. But it was rough. I’ve never been that tired in my whole life.

My team discussed my options. My body was starting to have a rheumatoid arthritis/lupus reaction to the drug. We had a discussion. They listened to my input and I felt respected. It wasn’t all of them deciding for me. We all agreed together that I stop the treatment. As a result, my follow-up scans and blood work looked good.

As far as I know, I’m cancer-free. Any anxiety I may have had about my condition has dissipated because of God’s Grace and my implicit trust in the Fox Chase team.