Scott Parker: The Road to Recovery from Laryngeal Cancer 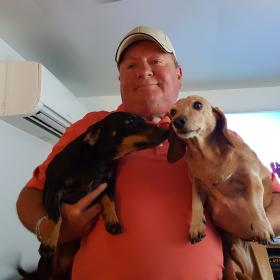 "Now, if they offer it at Fox Chase, this is where I come. I’m so confident in the people here."
‐Scott Parker

I was a busy and active 45-year-old, working 50 to 60 hours a week as a railroad engineer as well as taking care of my father, who had a traumatic brain injury a few years earlier and was living in an assisted-living facility. I knew something was wrong when I started losing my voice. As a locomotive engineer, I frequently needed to communicate with my colleagues through radios, and without my voice, I couldn’t work effectively. My primary care doctor diagnosed me with allergies, but the problem persisted, and, finally, I visited an ear, nose, and throat specialist who spotted the cancer right away.

The Diagnosis, The Treatment and The Recurrence

At the age of 45, I was diagnosed with laryngeal cancer. I headed straight to Fox Chase Cancer Center because I knew of the Center’s name and reputation. Thank God I came here.

In 2010, I underwent 28 straight days of radiation at Fox Chase Cancer Center Buckingham. I give five stars to Dr. Shelly Hayes, radiation oncologist and director of Fox Chase Buckingham. Everyone at that facility goes out of their way for the patients. Because of my treatment, I didn’t work for more than a year; I couldn’t speak, and eating and drinking became a challenge.

I eventually returned to my daily routine, but in 2013, I started to lose my voice again. In December 2013, a Fox Chase head and neck surgeon performed a laryngectomy to remove my larynx, or voice box. I then underwent reconstructive surgery with a plastic and reconstructive surgeon, to repair the damage from radiation and surgery.

The surgery hit me pretty hard. Any surgery is tough, but losing my voice box was hard. After recovering at Fox Chase, I was released three weeks after surgery, just before Christmas. Fox Chase sent me home with an abundance of support. Though I had a long road to recovery, I had support from the staff at Fox Chase, my wife, Denise, and my dogs, Samson and Brutus.

Even after my surgery, I continued to come to Fox Chase to work with the speech pathology department and regain my communication function. I couldn’t ask for better care. The staff takes their time and doesn’t rush. They work with patients one-on-one.

I am now cancer free and come to Fox Chase for check-ups and screening every six months. And after working closely with a speech pathologist for many months, I now only need to use the service on an as-needed basis. Unfortunately, without my voice, I couldn’t return to my job as a railroad engineer, and I’m on permanent disability. I’m somewhat active, but I’m challenged with my breathing at times.

Despite these challenges, I’m taking full advantage of my new lease on life: I’m enjoying my retirement and spending time with my wife and dogs. I recently took up golfing with a neighbor, and I’m having fun working on my game.

I’m also trying to support other people who have had laryngectomies. I help to recruit patients for screening, and I speak to newly diagnosed patients with laryngeal cancer. I currently serve as the vice president of a laryngectomy support group, the Speakeezy Club of Delaware Valley. The club meets monthly at Fox Chase, and we provide information, education, and psychosocial support to patients and their families. Patients can connect with one another to talk about their experiences, offer tips to each other, and talk about what new patients can expect before and after their surgeries.

I now come to Fox Chase for any medical needs I might have that they offer. I recently had a routine colonoscopy done and had a noncancerous cyst removed from my colon at Fox Chase. If they offer it at Fox Chase, this is where I come. I’m so confident in the people here.

If you’ve been diagnosed with cancer, be positive—there is always hope. And listen to your doctors’ suggestions. They know better than anyone how to care for you.