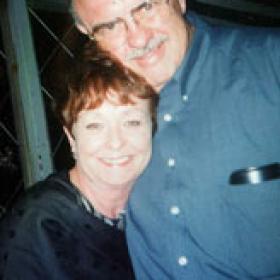 "I felt a level of warmth and comfort at Fox Chase so I decided to go there."
‐Rosella Nelson

I have two important pieces of advice for anyone diagnosed with cancer: Get a second opinion and go to a nationally recognized cancer center. You may have to fight a little harder with your primary doctor, work a little harder to get all of your records in order and transferred, and travel a little farther, but getting treatment at a cancer center is worth it.

I was diagnosed with breast cancer after years of being treated for noncancerous fibroids in my right breast. I wasn’t surprised in early 2007 when my doctor called after a routine mammogram to tell me about an abnormality. I was surprised, however, to learn that the abnormality was in my left breast.

I soon met with a general surgeon at a hospital near my home in Milleville, PA, about three hours northwest of Philadelphia. The surgeon said that I had invasive carcinoma and that I should have a double mastectomy within a week, which meant removal of both of my breasts and my lymph nodes. The surgeon also referred me to a reconstructive surgeon.

At the time, my daughter was living in Philadelphia and my son in New York, and both cities have two of the nation’s top cancer centers—Memorial Sloan Kettering and Fox Chase Cancer Center. I could also stay with my daughter or son depending on which institution I chose. My father and grandfather both had positive experiences in New York, but I felt a level of warmth and comfort at Fox Chase so I decided to go there.

My husband and I got on the phone to assure that I could be seen at Fox Chase. I was assigned a team of doctors at there, including Dr. Richard Bleicher, a surgeon, and Dr. Penny Anderson, a radiation oncologist. They recommended a much less invasive surgery to remove the Stage 2 tumor in my breast. The surgery was an outpatient procedure, so I was able to go home the same day. Because it was Stage 2 cancer and had not metastasized, I did not need any additional treatment.

I can’t say enough about everyone at Fox Chase. There was not one person I met that wasn’t helpful, supportive, and knowledgeable. That includes the schedulers, the nurses, the doctors, and other support staff. Everyone was well educated about how to treat my cancer, how to treat me as a person, and how to help me with my own personal situation.

Despite the great distance I have to travel from my home to Fox Chase, and the approval I was given to be checked on at my primary care facilities, I prefer to go back to Fox Chase for check-ups. I feel very protected in the Fox Chase environment, and I feel that they really care for me and about me. Thanks to Fox Chase, I have both of my breasts and my life to prove it.