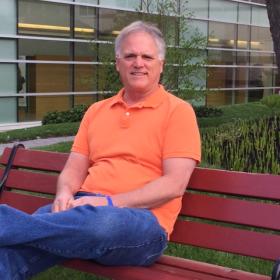 "I thought I was too young for this."
‐Ray Beckler

I have had 4 cancers that I was supposedly too young to have. I was 19 in the summer of 1974 when I developed severe hemorrhoids. My family doctor examined me and then sent me to a surgeon. For years after the surgery, I continued to have symptoms, including bleeding. I had fecal occult tests, but the blood was always attributed to an internal hemorrhoid.

I tried to improve my digestive health by eating more fish, fresh vegetables, whole grains, low fat, and fresh fruit, and I limited my consumption of meat and potatoes. By age 44, my symptoms had gotten worse. The doctor ordered a sigmoidoscopy that again found nothing but a bleeding hemorrhoid. My gastroenterologist told me I was too young for the problem to be cancer. Of course that was exactly what I wanted to hear, so I didn’t pursue a second opinion.

It was 3 years later in 2002 that I developed a perirectal abscess while on a diving trip with my oldest son in the Florida Keys. By the time I got home I needed prompt surgery. When the abscess quickly returned, a CT scan revealed a large mass in my sigmoid colon, and the subsequent colonoscopy confirmed that I had colon cancer.

I had all the same thoughts I’m sure everyone has when they are diagnosed with cancer. Why me? I’m too young for this. It can’t be happening. I don’t want to die. I’m eating a healthy diet. Why doesn’t that person who chokes down Big Macs and double fries have cancer?

I was 47, had been married 24 years, and had 2 young sons. I just was not ready to give up, so I decided to take control of the situation. I looked into 3 National Cancer Institute centers within driving distance and selected Fox Chase for a second opinion. The preadmission scans at Fox Chase showed several enlarged lymph nodes and a spot on my liver. I was told that stage 4 cancer was a possibility.

Dr. John Hoffman, a surgical oncologist, removed my sigmoid colon with the tumor and surrounding tissue and lymph nodes, and he managed to preserve my bowel functions. He also determined that there was only a benign cyst on my liver. Two days after the surgery, the pathologist found no cancer in my lymph nodes, which meant my cancer was stage 2 instead of stage 4.

My medical oncologist at Fox Chase recommended a course of adjuvant chemotherapy. It was my oldest son who made the decision for me to proceed with the treatment. He said, “Dad, if you don’t do it and it comes back, you’ll never forgive yourself and we will all be second-guessing. So just do it.”

I was into my fourth month of chemotherapy when a dermatologist found a suspicious mole on my back that was diagnosed as very early stage melanoma, which was treated with a simple excision of the mole and surrounding skin. I took that diagnosis in stride, and we joked that I had joined the cancer of the month club.

After the chemotherapy, my life returned to a new normal. I got in shape, helped other newly diagnosed people, and became a ‘colonoscopy evangelist,’ convincing others that they should have the procedure. I also had continued surveillance, and 18 months after my surgery, a colonoscopy found a severely irregular polyp that most likely would have turned into another tumor.

My next experience with cancer occurred 1 year after chemotherapy when my dermatologist at Fox Chase detected a basal cell cancer on my left ear during a routine screening. A reconstructive surgeon removed the cancer and left me with a normal looking ear. It was the second time I had been diagnosed and treated for that type of cancer. A basal cell cancer had been removed from my face when I was 36.

I am a truly blessed, 4-time winner, thanks to the talented staff at Fox Chase Cancer Center who got me through some difficult times. My sons are now grown, and my wife, Cindy, and I are looking forward to many more years together.