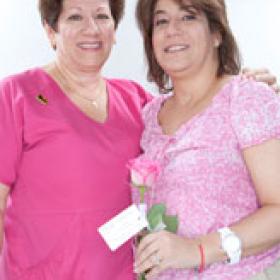 "I wanted the best possible treatment at the best place. So I chose Fox Chase.”
‐Marion Utain

Marion Utain recalls hearing the worst news she could imagine: she had breast cancer. And then, as she tells the story, the miracles started. A month after her annual gynecological exam in November 2011 at 46, Marion felt a lump in her left breast. She made an appointment to see her doctor the next day.

“I figured it was just a cyst, but wanted to be sure.” After a diagnostic mammogram and an ultrasound, her doctor said there was a 50/50 chance that she had cancer. A needle biopsy at her local hospital was inconclusive. Next, this high school teacher and resident of Cheltenham, underwent a core biopsy to confirm a diagnosis. Marion was quite surprised to learn she had triple negative breast cancer, an aggressive form that tests negative to estrogen and progesterone receptors as well as Her2, making it impervious to traditional breast cancer drugs. “My local doctor recommended that I enter their hospital's 'fast track' program to get a lumpectomy and begin radiation therapy.”

Given the complicated nature of her diagnosis, Marion wanted a second opinion and put calls out to both a large university hospital in downtown Philadelphia and Fox Chase Cancer Center. The day before her scheduled lumpectomy at her local hospital, Marion had an appointment at Fox Chase with Marcia Boraas, MD, a breast surgeon who had also treated her neighbor. Once Dr. Boraas learned more about Marion's diagnosis, she drew upon her expertise in the area and referred Marion to her colleague, Lori J. Goldstein, MD, a medical oncologist who specializes in breast cancer treatment.

"Triple negative breast cancer (TNBC) refers to a subgroup of breast cancers that do not express the estrogen receptor (ER), the progesterone receptor (PR) nor Her 2," explained Dr. Goldstein. "This group comprises about 15 percent of all breast cancer and carries a worse prognosis that tumors that have any or all of these proteins (ER, PR, and Her 2). Because TNBC does not have ER, PR or Her2 targeted therapies aimed at those receptors are inactive and, therefore, the only standard option is chemotherapy alone." Marion's clinical trial was based on pre-clinical investigations that suggested that the chemotherapy and PARP inhibitor were especially active in TNBC. Results from this study were presented at the San Antonio Breast Cancer Symposium in December 2012.

"I knew my cancer was aggressive," said Marion. “But I’m a researcher – I don’t rest until I’ve turned over every stone.  I wanted the best possible treatment at the best place. So I chose Fox Chase.”

Because she had not yet undergone the lumpectomy, Marion was eligible for a PARP inhibitor chemotherapy drug trial. “That was a big miracle,” she said. Dr. Goldstein prescribed six three-week cycles of chemotherapy, with two weeks on the drug and one off. "The more I learned about clinical trials, the more comfortable and confident I become in my decision to enroll." Dr. Goldstein met with Marion each week to check her progress, and within two weeks the mass was staring to shrink. After four weeks, the tumor could not be felt by touch.

“My experience with being on a clinical trial was overwhelmingly positive,” she said. “I got amazing treatment, in a private chemotherapy room, always with a member of my family with me. It really brought us closer together.”

When the trial ended, Dr. Boraas performed breast conserving surgery and recommended a course of radiation to be sure the tumor was completely gone. Marion met with a radiation oncologist at Fox Chase. "My doctors wanted to do everything in their power to make sure the cancer was clinically gone." Marion began a six week course of radiation therapy that ended in August 2012.

“Overall, my experience was just amazing,” she said. “I have one of the best cancer treatment centers anywhere within five minutes of my house. I was well taken care of in every way.” Marion had a strong family history of cancer; her grandmother died of ovarian cancer at 54 and her mother had uterine cancer. Because of this history, Marion’s radiation oncologist, recommended that she consider prophylactic gynecologic surgery to prevent future diagnoses.

"In the spring of 2013, I was meeting with my radiation oncologist, who asked, 'What are you waiting for?'," recalled Marion, who couldn't come up with a good reason. "She was right - I needed to move forward with the surgery." Later that week, Marion picked up a magazine and saw that Stephanie King, MD, a gynecologic surgeon at Fox Chase, was listed as a top doctor. She did her research and learned that Dr. King specializes in single-port surgery, which means there is one tiny incision in the belly button. Marion made an appointment with Dr. King and had the surgery in May 2013. "The whole experience was incredible," said Marion.

As a result of the hysterectomy, Marion, like many women, enter menopause, which comes with its own symptoms. To help her manage these side effects, Marion meets regularly with Dr. Emmie Chen, of Fox Chase's psychiatry department. "They are so helpful and have taught me techniques to manage anxiety, including yoga and meditation" Marion takes a yoga class at Fox Chase twice a week.

“If you’re diagnosed with breast cancer, don’t just get a lumpectomy without seeing a doctor at Fox Chase,” said Marion, whose team included Dr. King, Dr. Boraas, Dr. Goldstein, and Dr. Chen. “Fox Chase made all the difference for my family and me.”