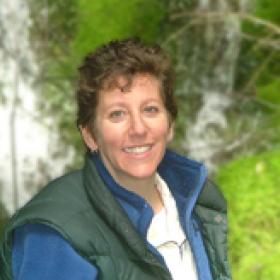 "They are all wonderful and have given me tremendous support over the years."
‐Linda Stockman-Vines

Linda Stockman-Vines considers herself lucky. She has been closely monitored by the doctors at Fox Chase Cancer Center since 1993, but does not have cancer. Instead, Linda has a strong family history of cancer and wants to do all she can to avoid getting cancer if she can.

A strong family history of cancer

Linda's grandfather was one of seven siblings. All but one died of cancer (he had heart disease). Doctors are not sure whether Linda's mom died from ovarian or peritoneal cancer, but either diagnosis increases her risk. Finally, her aunt had breast cancer.

"In 1993, when the Risk Assessment Program was fairly new, my mom and I attended an information session with Dr. Daly," said Linda. "I signed up right away."

Dr. Mary Daly founded the Risk Assessment Program in 1991 to provide prevention and early detection specifically for women with a family history of breast and/or ovarian cancer. The program was the first of its kind in the region and one of the first such programs in the nation. After 10 years, the program has helped more than 3,200 women and 1,800 families.

Women who are genetically predisposed to developing breast cancer can be tested to learn whether they carry the BRCA1 or BRCA2 gene mutation. This mutation puts them at increased risk of the disease.

"I learned that I carry the BRCA2 gene mutation."

Linda recalled, "A few years after joining the program, genetic testing for the gene mutation became available. After going through the testing, I learned that I carry the BRCA2 gene mutation."

Through the years, researchers also made the connection of ovarian cancer to breast cancer. A strong family history of either cancer can increase risk of developing either cancer. Linda decided to have her ovaries removed prophylactically. Dr. Cynthia Bergman, a surgeon at Fox Chase, performed the surgery in January 2002.

"I just love the staff there (Risk Assessment Program)," said Linda. "They are all wonderful and have given me tremendous support over the years."

Linda's only daughter is 20 years old. She may eventually make the decision to join the program herself.