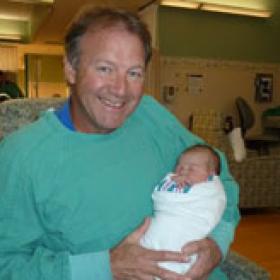 "Hearing the words 'you have cancer' are hard to take, regardless of the circumstances."
‐John O'Donnell

Prior to 2004, John O'Donnell did not regularly visit his doctor for routine check-ups. He was active and felt healthy and didn't see any reason to go to the doctor. But a life insurance blood test indicated high cholesterol, which resulted in a rate increase. That prompted John to see a doctor annually. In the spring of 2009, during a routine appointment, John's doctor noticed something suspicious which raised his concern for prostate cancer. As a result, he sent John for further testing.

John was just about to turn 53. His father had been treated for prostate cancer at 71, so he knew it was a possibility at some point down the road, but did not expect it at this age. However, he was not surprised when the test came back positive for prostate cancer.

"Hearing the words 'you have cancer' are hard to take, regardless of the circumstances," shared John. He and his wife, Mary Beth, began their research by visiting doctors, reading books and searching the Internet.

The O'Donnells quickly learned that there are several treatment options available for men with prostate cancer, with the most common being surgery, radiation therapy and “watchful waiting.” John discussed all of the options with his doctor. They agreed that based on his age and his otherwise good health, "watchful waiting" was not the best option. Both surgery and radiation have good success rates, and as with any treatment, side effects are possible so the choice is dependent on the individual circumstances.

John tried to objectively evaluate his treatment options but was consistently leaning toward surgery. "The thought that I had cancer growing inside of me made it difficult to commit to anything besides removal," admitted John, who followed in his father's footsteps and opted for surgical removal of the prostate.

When it came time to choose a surgeon and hospital, John had an easy time. "We were looking for the best place to go and our research pointed us right to Fox Chase - a world class hospital whose surgeons have performed thousands of robotic procedures." The O'Donnell's met with urologic surgeon David Y. T. Chen, MD, FACS. They immediately connected him as he answered all of their questions and addressed their concerns. In July 2009, Dr. Chen performed a da Vinci® robotic-assisted radical prostatectomy, which is minimally invasive surgery to remove the prostate.

During a follow-up visit, Dr. Chen inquired about John's family health history. John explained that both of his parents and two of his sisters had been diagnosed with cancer. While the only genetic connection seemed to be the prostate cancer, Dr. Chen referred John to Fox Chase's Risk Assessment Program.

John met with Andrea Forman, MS, CSC, a certified genetic counselor and Veda N. Giri, MD, for an in-depth discussion on his family history. "I learned that due to the high incidence of cancer in my family, and the age that I was diagnosed with prostate cancer, I had a higher than normal chance of having a mutation of my BRCA genes," John explained. Mutations of this type are usually associated with women’s health, but if he carried the mutation, his three daughters could inherit that from their father.

John recalled that while having blood drawn for genetic testing, he was preoccupied with the thought of how he would share this news with his daughters. Fortunately, John's test results were negative for the gene mutations. "With good news like that, I felt so relieved," added John.

In September 2011, John and Mary Beth became grandparents for the first time. "Seeing my granddaughter was the thrill of a lifetime. I am so grateful to Fox Chase for the care I received and to be here today," John said. "I am living a normal active life. I am healthy and cancer-free. What more can I ask for?"