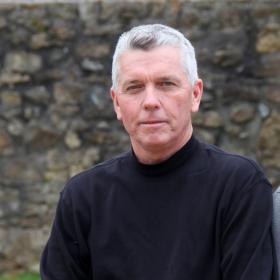 I have always been proactive about my health and started having annual prostate exams when I turned 50 in 2007. My first report was great and showed that my PSA level was undetectable.

When I turned 55, the level was slightly elevated at 0.9, and annual PSA tests over the following two years showed an increase to 2.9. My doctor encouraged me get checked more regularly.

Because my levels hadn’t hit 4.0, this newly elevated level was just a red flag. I questioned how this could be happening to me. I don’t smoke or drink, I’m active, and I eat healthy, so what could be going on? I didn’t tell anyone about this, not even my wife, Donna, of 37 years.  I just didn’t want to think about it or have anyone else worrying about it until it was time to worry.

About five months later, I had biometric screening, a health benefit offered by my employer. The screening also included a PSA test, so I elected to do that as well, and I’m glad I did. The test showed that my PSA level had risen to 3.4, so I contacted my urologist and sent him a copy of the results. He called back within a day or so to say it was time for a biopsy. At that point, I had to tell my wife.

Donna and I discussed everything I had been told over the previous five months, and she was understandably upset that she had been kept out of the loop about my health. We needed to make a decision about what to do or where to go. I knew that if this turned out to be cancer, I wanted to go somewhere that could not only do the biopsy but also treat me. Only one place came to mind: Fox Chase Cancer Center. My wife set up the appointment.

My first appointment at Fox Chase was with Marc C. Smaldone, MD, MSHP, a urologic surgeon. He explained that a biopsy was necessary because there was a nodule on my prostate. Donna and I had so many questions, and he took the time to answer every one. We felt very confident that I had the right doctor because Dr. Smaldone made us feel at ease and was very personable.

I was surprised when Dr. Smaldone called me as soon as he got the biopsy results. He explained that I had an aggressive form of prostate cancer, and he said I needed a full body scan and a CAT scan of my abdominal and pelvic areas to determine whether the cancer had spread. Fortunately, it had not.

My treatment options included surgery or radiation therapy. The only decision that felt right for us was removal of my prostate. I was particularly interested in robotic surgery, which would be minimally invasive. I figured that I was young and in relatively good health, and I felt confident that with Dr. Smaldone’s care I would continue to live the life I have.

The surgery was a success and I felt no pain. I spent only one night in the hospital and was then discharged home. I felt so good I was even able to walk around my neighborhood for exercise. The only side effect of surgery was constipation, but Dr. Smaldone had a remedy, and I felt as good as new.

A few days later, Dr. Smaldone phoned to tell me that he was confident that the cancer had been contained in the prostate and that there was no other evidence of malignancy in any surrounding tissue or in the lymph nodes he had removed. He said no further treatment was needed at that time.

Life after surgery was great. I felt good about going back to my normal routine of exercising every morning and working full time, and I continued to get my routine PSA tests. When one test result rose slightly to 0.03, Dr. Smaldone suggested I repeat the test the following week. Unfortunately, the next test showed the PSA level had increased to 0.04.  My wife and I were concerned. Even though we had known this was a possibility, we had hoped it would not happen so soon.

We discussed with Dr. Smaldone my options for therapy. He felt confident that because this increased PSA level was detected so soon after surgery, the cancer was probably still located in the prostate bed. Dr. Smaldone referred me to Shelly Hayes, MD, a radiation oncologist at Fox Chase Buckingham.

I had radiation therapy five days a week for a total of 34 treatments, which sounded like a long time but went by pretty quickly. Dr. Hayes and the staff there made me feel comfortable and at ease. I had my first PSA after radiation, and my results didn’t change. With things progressing the way they were, my wife and I started thinking more and more about retirement. Should we do it sooner than we planned?  Should we continue to work a little longer?

I was referred then to Matthew Zibelman, MD in the hematology oncology department at Fox Chase. He ordered a full-body bone scan and a pelvic CAT scan, which indicated that the cancer was located in one of my posterior ribs. Also, my PSA had increased to 2.5, and so Dr. Zibelman recommended hormone therapy.

Hormone therapy had always been a potential treatment for me in the future, but Donna and I had hoped to delay that type of therapy due to some of the side effects. I always remember my wife telling me, “We are in this together and as long as I get to wake up next to you every day, side effects will not be an issue.” I recently received my first hormone therapy injection and will continue to have them every three months. I also will continue to monitor my PSA levels until things are under control.

Even with all that news and new therapy, I still feel great and continue to have a very positive attitude about all of this.  Donna and I decided to live out our dream to retire early and enjoy life. We moved to the Myrtle Beach area where we plan to live a long and exciting retirement doing all the things we dreamed of doing.  We are looking forward to relaxing by the pool with our children and grandchildren, golfing, biking, sightseeing, traveling, and spending time together.

I wake up looking forward to new adventures and enjoying life to the fullest.  I am very thankful for the Fox Chase family for their knowledge, continued support, and concern for my wellbeing. Donna and I have maintained a positive attitude, even though we faced what most people would consider devastating news. We knew that no matter what came along, we would deal with it together.

From the very first contact at Fox Chase’s office to the nursing staff at the hospital, and even the patients walking around the facility, we felt there was such a positive feeling that can’t be explained. Everyone greeted us with a smile and a hello. We cannot say enough about the staff at Fox Chase.