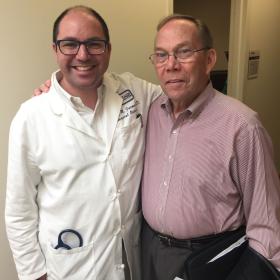 "If anything can be done to help you when you have cancer, it is going to happen at Fox Chase."
‐Joe Weiss

I was 66 years old in 2009 when I noticed that a dime-sized mole on my back was beginning to change. My local doctor took a biopsy and diagnosed stage 5 melanoma. The diagnosis came as a shock, but also made sense; I had been a beach lover all my life and had not worried much about exposure to the sun during my childhood summers at the Jersey shore.

The doctor gave me several choices for treatment: I could go to the local hospital, to a large hospital in Philadelphia, or to Fox Chase Cancer Center. I knew about Fox Chase’s reputation for professionalism and competence, so I knew I wanted to be treated there.

My first appointment at Fox Chase was with Jeffrey M. Farma, MD, FACS, a surgical oncologist who specializes in treating patients with melanoma. I was very anxious at that visit, but after our first meeting I knew that Dr. Farma and his team would help me make informed choices and would guide me every step of the way.

Dr. Farma ordered additional testing, including a colonoscopy, and then recommended that I have the mole removed along with three sentinel lymph nodes. The pathology would determine whether the cancer had spread. Dr. Farma identified a suspicious spot on one of the lymph nodes, but it was too small to determine whether it was malignant. I decided to take an aggressive approach with my treatment, so I agreed that Dr. Farma should remove the remaining 31 lymph nodes.

Dr. Farma performed the surgery in November 2009. During and afterwards, he came out and took the time to talk to my wife to explain how everything had gone, which was meaningful to us. I really appreciated the benefits of Fox Chase’s team approach. My team included a dermatologist, a medical oncologist, and a surgical oncologist who worked together to diagnose, treat, and monitor my health. Since my treatment, I continue to see Dr. Farma twice a year for check-ups.

My faith in the doctors at Fox Chase helped me deal with a serious diagnosis. The mental part was challenging for me. Anytime you talk about the big C, it’s pretty scary, but I had confidence that Dr. Farma and his entire team knew what they were doing. I felt that I was in good hands. If anything can be done to help you when you have cancer, it is going to happen at Fox Chase.