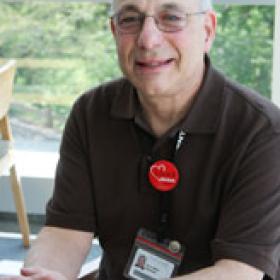 Several years ago, in 2005, when I was practicing dentistry, I discovered a nonhealing sore in my mouth. I asked my oral surgeon to take a biopsy. A week later, I was preparing for my evening patient hours when I received a fax that would change the course of my life. The fax contained the results of the biopsy from the Oral Pathology Department at Temple University. The test results revealed that what I originally thought was a common ulcer was actually squamous cell carcinoma—malignant cancer on my tongue.

I recall thinking, “This can’t be happening to me.” I was 59 years old and had no risk factors. I believe my training as a dentist might have saved my life. Someone else might have ignored the nonhealing mouth sore, but I suspected something was seriously wrong.

I took immediate action and sought the professional advice of the doctors at Fox Chase Cancer Center. Being a dentist, I knew of Fox Chase’s reputation, and several oral surgery friends highly recommended going there. I made an appointment with Dr. John A. Ridge, chief of head and neck surgery at Fox Chase, who, along with a Fox Chase pathologist, read and assessed my test slides.

Dr. Ridge met with me to review treatment options and felt the best course of action (for this small tongue cancer) would be to remove part of the tongue and lymph nodes from the neck. Removal of the tongue cancer with clear margins was designed to cure the cancers there, and removal of lymph nodes could tell whether more treatment should be recommended. In addition to the surgery, I needed physical and speech therapy. I was pleased to learn after my operation that radiation and chemotherapy were not needed.

Following surgery, I stayed in the hospital for three nights and recovered at home during the next several weeks. During this period, my wife cared for me as I slowly returned to eating solid foods and worked with the wonderful speech and physical therapists at Fox Chase. After six weeks of recovery, I returned to my dental practice on a reduced schedule for about a month.

I now understand and promote the importance of oral cancer early-detection screenings. In December 2009, I retired from my dental practice and filled my time as a vocal and active advocate for thorough and proactive oral cancer screenings. I also spent some time as a volunteer at Fox Chase and then at a local hospital.

Shortly after my surgery, I joined several organizations whose missions are to educate and lobby for more and better oral cancer screenings. I continued to spread the word by addressing students at regional dental schools, participating daily in an Oral Cancer Foundation patient forum on the Internet, and speaking at and providing free oral screenings at community events and fundraisers.

I currently spend my winters in Florida and no longer volunteer. My wife and I celebrated our 48th wedding anniversary this year, and we have two children and four grandchildren.

I’m positive proof that early detection saves lives! It’s been more than 10 years since I found out I had cancer, and as result of early detection and Dr. Ridge’s expertise, I’m thrilled to be able to report that I’m cancer-free today.