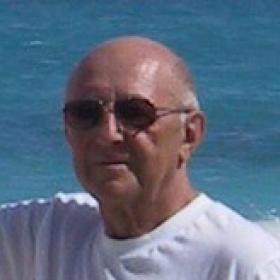 "Fox Chase Cancer Center had just what I was looking for - IMRT."
‐Howard Kulp

Howard Kulp knows how to successfully navigate his way through life. In his younger days, Howard successfully operated a couple of IGA grocery stores. He later sold them and purchased bowling lanes. Once they were profitable, he sold them and moved on to the water business. Until he retired in 1997, Howard worked as an independent contractor selling bottled water. It seemed Howard knew how to manage the future.

In 2002, this all changed when Howard faced prostate cancer. "My PSA levels were rising. Every 6 months I would get a biopsy taken at my local hospital. Then one day I was given the terrifying news. I had cancer for the second time in my life," said Howard. About 35 years ago, Howard was diagnosed with cancer in his lymph nodes, but was successfully treated.

Howard surfed the internet to find the best treatment available for prostate cancer. He was willing to travel anywhere in the country for the latest technology available. Luckily for Howard, Fox Chase Cancer Center had just what he was looking for - IMRT (Intensity Modulated Radiation Therapy) a mere 80 miles from home.

"I happened to find Fox Chase on the Internet. I was impressed with its sophisticated, modern equipment. I was willing to travel across the country for the best treatment. I felt fortunate that Fox Chase had what I needed and was relatively close to home. After meeting Dr. Uzzo and Dr. Horwitz, I was delighted with my decision," said Howard.

Howard's wife, Joann, commuted with him every day, 5 days a week, for 8 weeks. "Joann didn't miss a day. The doctors are great and we adored the staff. They are so accommodating. Driving 160 miles a day for treatment didn't bother me a bit," explained Howard. "And the radiation was a piece of cake compared with what was available 35 years ago!"

Although Howard was delighted with Dr. Uzzo, he didn't realize Dr. Uzzo's national reputation for kidney cancer surgery. Howard surfed the Internet in search of laparoscopic cryosurgery his tumor and found Fox Chase to be one of the few hospitals in the nation offering this minimally invasive procedure. (Cryosurgery freezes and then kills cancerous cells.)

"Although I was overly pleased with my first experience at Fox Chase, I searched for a hospital that offered this procedure. Ironically, Fox Chase was one of the few hospitals that did. Dr. Uzzo happens to be a leader in this field, which made my decision easy. It was back to Fox Chase for me," said Howard. Dr. Uzzo successfully removed Howard's tumor using laparoscopic cryosurgery.

Today Howard continues to be watched by his team at Fox Chase. He considers himself lucky to good be in good shape compared to some of his peers. Other than that, Howard is enjoying being a grandfather, listening to jazz music and reading. "I used to play golf. I gave that up when my son beat me . . . and he was only 12 at the time!" concluded Howard.