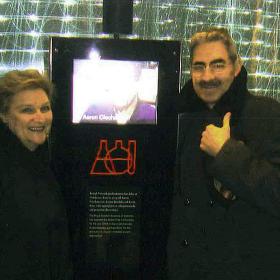 My worries and fears were allayed during my first visit with Dr. Uzzo.
‐Fred Cohen

Two dates are seared into my memory. On November 30, 2015, my wife and I were attending a funeral for a very dear friend, who had died after a long ordeal with kidney cancer. After the viewing I used the restroom and I noticed something unusual – blood in my urine. Obviously concerned, I called my urologist in the car on the way to the cemetery. He recommended I come in right away for an exam. On January 7, 2016, after weeks of tests and exams, the suspicion was confirmed: I had bladder cancer.

After exploratory surgery to determine the extent of the disease, I received good and bad news.  The good news was that my cancer could be managed; the bad news was that there was a shortage of BCG— the specific immunotherapy drug I needed.

Having been a pharmacist for decades, I certainly knew how to locate necessary drugs, but I found BCG only in distant places. Increasingly worried, I reached out to my longtime friend Avram Hershko, a professor of biochemistry in Israel.  We met in the late 1970s, when my sister helped the Hershko family find temporary housing while Avram was a visiting researcher at Fox Chase Cancer Center. My own family hosted Aaron Ciechanover, one of Avram’s colleagues at the time. Avram reached out to Richard Fisher, the president and CEO of Fox Chase, who, in turn, contacted Robert Uzzo, chair of the department of surgical oncology at Fox Chase. Dr. Uzzo had anticipated the shortage and stocked up on BCG. I made an appointment to see him at Fox Chase immediately.

My worries and fears were allayed during my first visit with Dr. Uzzo, but before our appointment I had scheduled a consultation with another physician at a reputable cancer hospital in New York. I still felt drawn to hearing another opinion, so I kept the appointment in New York. When I explained to the other doctor that I had seen Robert Uzzo, he said quite candidly, “you already have the best in Dr. Uzzo.”

At Fox Chase I had a second exploratory surgery and then, six weeks later, I got started on my drug treatment. I was given immunotherapy instead of a chemotherapy drug. As a pharmacist, I found it interesting that the same drug is also used as a vaccine against tuberculosis. It works by stimulating the immune cells in my bladder to destroy the cancerous cells. The drug is administered directly into the bladder using a catheter. It sounds unpleasant, and it is. Yet, my nurse Sue Burke, through her expertise and skill, always ensures my comfort.

In the first year, beginning in February 2016, I had thirteen treatments. I am now finishing up the last treatment of my second year, and will enter into my third year of treatment in a few months. I remain a bladder cancer patient, although my disease is under control. Every three months Dr. Uzzo checks the effectiveness of the treatment. I always ask if he’s happy with my progress because, if he’s happy, then I’m happy.

The path to my present state of well-being is seasoned by human caring and connections. My sister introduced me to Avram and Aaron, their collaborative work with Irwin “Ernie” Rose at Fox Chase in the 1970s and 1980s led to all three receiving the Nobel Prize for Chemistry in 2004. Their strong link to Fox Chase and my deep ongoing friendship with them brought me to the Center and to Dr. Uzzo.  Under his care I am able to live and enjoy the life I’ve always known. I feel well. I am grateful.