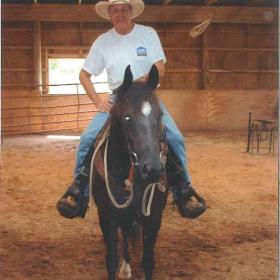 "We were lucky to have Dr. Hoffman on my team."
‐Donald Ebaugh

When he retired in 1990 at the age of 57, Donald Ebaugh was likely one of the most active retirees in Delaware. After retiring from the State's Medical Laboratory Division in Dover as a medical lab technician, he devoted much of his time to caring for horses, both as a trainer and rider. In 2015, at the age of 82, he still spends time with his horses, but two bouts with cancer have caused him to slow down.

By the winter of 2008, Don began to experience unpleasant symptoms in his gastrointestinal tract and sought medical attention. His physician in Dover, DE, performed an endoscopy which revealed cancer. His physician referred Don to John Hoffman, MD, FACS, Chief, Pancreaticobiliary Service at Fox Chase Cancer Center, a surgeon who specializes in treating patients with pancreatic cancer.

"My wife, Kathleen, our son, Raymond, and I met with Dr. Hoffman at Fox Chase and other members of the team, who spent time explaining the Whipple procedure in great detail," recalls Don.

"Learning that Don had bile duct cancer was really scary," explains Kathleen. "We were about to go through the most difficult ordeal during our 53 years together. We also had the daunting task of explaining this news to our 7 children and 11 grandchildren."

"We were lucky to have Dr. Hoffman on my team."

"We were lucky to have Dr. Hoffman on my team,” admits Don. “Not only is he an accomplished surgeon with the expertise of performing the Whipple procedure, which is hard to find, but Dr. Hoffman has a wonderful personality with a gift of 'down home feeling.' He went the extra mile to keep us informed."

Dr. Hoffman performed Whipple surgery, which can selectively be used for patients with cancer of the bile duct. There are just a handful of surgeons in the country that are skilled at this demanding surgical procedure. It involves removing the head of the pancreas, some of the small intestine and the gall bladder. Dr. Hoffman then reconstructed Don's digestive tract to preserve function.

Don stayed in the hospital for 9 days to recover. "Everything at Fox Chase went so well. The nurses were wonderful and always available to help in any way they could," shares Don, who was pleasantly surprised with the outcome of his surgery.

"I am grateful that my body is functioning as well as it did before I got cancer. I don't have a colostomy bag or anything. I am feeling really good," says Don, who now considers Dr. Hoffman a friend.

"It was a great feeling to know I could have my surgery performed at Fox Chase by one of the country's top surgeons and have my follow up care close to home," explains Don, who began a course of chemotherapy and radiation therapy at nearby Kent General Hospital after recovering from surgery.

"It was convenient to go to Kent because of the frequency of my treatments. Dr. Hoffman stayed in touch with my doctors and monitored my care, which gave me peace of mind."

In 2012, at the age of 79, Don learned he had cancer again. This time it was head and neck cancer. “When I learned I had cancerous lymph nodes in my neck, I knew it was time to go back to Fox Chase,” explains Don. This time he met with John A. Ridge, MD, PhD, FACS, Chief, Head and Neck Surgery at Fox Chase.

Dr. Ridge performed a complete removal of Don’s left parotid gland and complete removal of the lymph nodes on the left side of his neck. This was necessary because the saliva gland cancer was large and the cancer had spread through tissue fluid into lymph glands in the neck. These operations require precise technique, because the nerve that powers the face runs through the parotid gland and it must be separated from the cancer if possible.

According to Dr. Ridge, “This time Don did so well with the operation that, even at age 79, he was able to leave the hospital in two days!  His face was moving normally.”

Because it is challenging for Don to travel to Fox Chase for daily treatments, Dr. Ridge coordinated follow up treatment – again with chemotherapy and radiation – at Kent General Hospital near Don’s home. Head and neck radiation can cause lasting side effects, but Don is doing very, very well. Fortunately for Don, his age was not a barrier to receiving cutting-edge care.

“Dr. Ridge was incredible,” shares Don. “I still see him for follow-up care and we are grateful to him for the care he provided.”

Kathleen and Don celebrated 61 years of marriage in July 2015.  He continues to care for his horses when the weather is good and builds furniture in his shop during the winter. "I am very happy with the way I'm doing today, thanks to Dr. Hoffman, Dr. Ridge and the whole team at Fox Chase, along with all the prayers offered by my family and friends," adds Don.