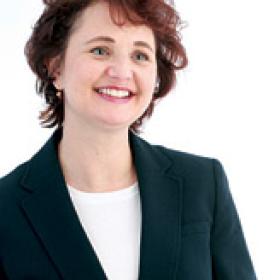 "If I hadn't been aware of my genetic status, I might still not know I had breast cancer."
‐Denise Portner

The results showed that my mother, my aunt, and I all carried the BRCA2 mutation. Genetic counselors at the hospital where my mother was treated advised me to consider prophylactic oophorectomy, a surgical procedure to remove one or both of my ovaries. They said it could help reduce my risk for breast and ovarian cancers.

I decided to get a second opinion and made an appointment at Fox Chase Cancer Center’s Genetics and Risk Assessment Program, where I met with Dr. Mary B. Daly. Dr. Daly agreed that I should have the surgery, and she gave me a book developed at Fox Chase: Ovarian Cancer Risk-Reducing Surgery: A Decision Making Resource. It was a valuable book for me because it included testimonials from women facing the same decision, as well as their thought processes as they contemplated how to proceed.

By June of 2009 I had decided to go ahead with the preventive surgery and scheduled an appointment with a gynecologic surgeon at Fox Chase. I also scheduled my first breast MRI since the genetic testing. When the MRI showed an area of concern, I underwent an ultrasound-guided biopsy of breast tissue. On June 16, 2009, a member of the Risk Assessment Program called to tell me that I had breast cancer. It was the day before my daughter’s high school graduation.

If I had not been aware of my genetic status, I would not have had the MRI and would not have known that I had breast cancer. I had never felt a lump, and even the mammogram that was taken after the cancer diagnosis was negative. I am fortunate that my mother and aunt received good advice and were tested for a genetic mutation so that I was able to catch it as early as I did.

The breast cancer diagnosis changed my treatment plans. I met with Dr. Richard Bleicher, a surgical oncologist at Fox Chase, who recommended a double mastectomy to prevent recurrence of cancer. I prepared for my decision by seeking a second opinion, consulting with family and friends and cancer survivors, reviewing medical literature, and having a heart-to-heart talk with my husband, a family physician.

I finally decided the best decision for me was to proceed with the mastectomy. I met with Dr. Sameer Patel, a plastic and reconstructive surgeon at Fox Chase, who assured me that the reconstruction would make me look and feel whole again.

Throughout the process of cancer treatment there are many important decisions to make. I appreciated that my oncologists were willing to give me their opinions and help me clarify my options. Being told you have cancer can be a surreal experience. You feel fine, but you also have a life-threatening disease. It is critical that you can put your trust in a team of professionals. From the moment of diagnosis at Fox Chase, I felt that I had stepped into a finely tuned operation of providers at the top of their game, ready to take care of whatever arose, and who were concerned about my emotional well-being.

I had surgery that summer, chemotherapy over the winter, and then radiation therapy in the spring. After all that, I underwent the originally planned oophorectomy.

It was a challenging ride, but I always felt that I was getting the best possible treatment and that I was fortunate to have a world-class cancer center within a 10-minute drive of my home. It was easy for family and friends to accompany me to doctor appointments and to sit with me in the infusion room, and I was able to integrate appointments into my day.

The oncologists at Fox Chase are champions for their patients. One worked closely with my insurance company to get approval for intensity modulated radiation therapy (IMRT), which takes more time and is more expensive than standard therapy but would help minimize the impact on my heart.

My last treatment was in 2010, and I have regained my energy and have a renewed sense of purpose at work. I also have been dedicated to supporting others affected by breast cancer. I serve on the board of directors of Living Beyond Breast Cancer. I made a video of my experience in honor of the 20th anniversary of Fox Chase’s Risk Assessment Program, which was celebrated in November 2011 at the studios of local NPR affiliate WHYY-FM.

Being involved in the Risk Assessment Program is like having a really smart and caring group of friends. It was a comfort to be connected to a program that combined our family history with research and clinical trials to provide state-of-the-art care and education. It felt good to know that I was contributing to the body of knowledge for our children’s generation.