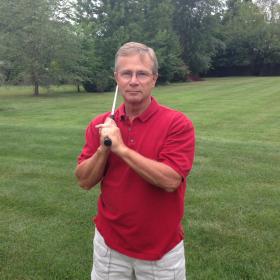 "The team at Fox Chase was crucial in helping us through this paralyzing time."
‐Chuck Leonard

In August 2012, at the age of 61, just two months after he retired, Chuck Leonard was diagnosed with stage four kidney cancer that had metastasized to his lungs. His world came crashing down around him. “My wife and I were devastated,” admits Chuck. “The cancer totally occupied our daily thoughts. Neither of us could sleep. We could barely function.”

Before the diagnosis, he’d considered himself in great health. But one month earlier, Chuck was bothered by a persistent cough. He saw his family doctor, who thought the issue might be a change in his blood pressure medication. When the cough continued, the doctor ordered a chest X-ray, which revealed lesions on his lungs. A CAT Scan detected tumors on both kidneys.

“You just can’t think straight,” he shares. “We didn’t know anything about cancer. But when I started reading, I learned there were so many options.” The first doctor Chuck was referred to reviewed all the tests and said, ‘This doesn’t look good.’ “He basically said ‘Most people have one to two years to live. We’ll try targeted therapy drugs which may extend your life. For some, this has been very successful, for others not.' We wanted another opinion.”

Chuck’s doctor referred him to a Fox Chase Cancer Center medical oncologist who specializes in genitourinary cancers, including kidney cancer. “The doctor carefully explained each of my choices with the possible outcomes," Chuck recalls. "This was especially important to me for my wife, who was going through this experience with me.”

“The team at Fox Chase was crucial in helping us through this paralyzing time,” says Chuck. “Because it’s both a comprehensive hospital and a research center, Fox Chase could offer me the best choices – including access to clinical trials, which was not available if I had stayed with the first doctor.”

But before he could enroll in a clinical trial, Chuck underwent additional testing, which revealed that some of the lesions on Chuck’s lungs had disappeared. This opened up another treatment option, which was surgery. That’s when he met the next important member of his team, Dr. Marc C. Smaldone, a urologic surgeon who specializes in treating patients with kidney cancer. “Dr. Smaldone gave us hope,” Chuck adds. “He was clearly a skilled surgeon, and I knew I was in the best of hands.” Chuck had one kidney removed, then, three months later, a third of the remaining kidney was also removed. Both surgeries went well, and Dr. Smaldone was able to save the remaining kidney and its function.

"I can’t say enough about Dr. Smaldone and his staff."

“I can’t say enough about Dr. Smaldone and his staff,” explains Chuck. “He even called me at home to see how I was doing.” Chuck’s recovery was short and successful, with his remaining kidney providing all of the function he needed. "Having a surgeon who was able to save my kidney helped me maintain my quality of life."

But his story doesn't end there. At a regular follow up six months later, in 2013, Chuck mentioned he had experienced some slight headaches. “They immediately had me in Fox Chase’s Diagnostic Imaging Center for a brain MRI,” Chuck recalls. The MRI revealed a tumor in his right temporal lobe. The kidney cancer had metastasized to his brain, but fortunately it was straightforward and surgery was an option once again. Chuck underwent a craniotomy at Temple University Hospital (Fox Chase is a member of the Temple University Health System).

Following surgery, Chuck began a course of stereotactic radiation therapy, which is a very precise, focused form of radiation delivered to the area in the brain where the tumor was removed. Dr. Shelly Hayes, director of Fox Chase Cancer Center - Buckingham, was able to deliver this therapy using the most advanced technology, called CyberKnife. As opposed to the standard whole brain form of radiation that is often administered following removal of a metastatic brain tumor, stereotactic radiation is much better tolerated. This spares patients the neurocognitive side effects of whole brain radiation and is more convenient, being delivered in one to five sessions (Chuck had three) compared to 10-15 sessions as is done with whole brain radiation.

"I’m so thankful for all the outstanding care, both medical and other, provided by Fox Chase and the caring doctors and nurses."

“In 2016, I can mark three years since I have had detectable cancer,” shares Chuck. “I’m so thankful for all the outstanding care, both medical and other, provided by Fox Chase and the caring doctors and nurses. Hopefully, my tests will continue to have good outcomes, and, if not, I know I’m getting the best care possible from Fox Chase Cancer Center.”