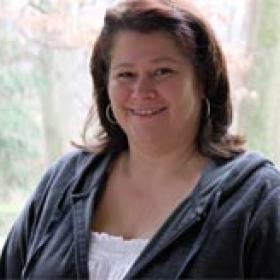 "My doctor didn't think it was treatable. . . Thank God I listened to [my boyfriend's parents] and went to Fox Chase."
‐Beth Valenti

Beth Valenti always knew smoking was not a good idea, but like many people, she did it anyway. She was young and never really thought about lung cancer. But after losing her mom to cancer in 1996, Beth quit the habit cold turkey. Almost 12 years later, in March 2008, she went to the doctor complaining of pain in her arm. A series of shoulder x-rays revealed a mass on her lung. According to Beth, her doctors advised her to "go home, get your things in order and plan your funeral." She was 41 at the time.

"My doctor didn't think it was treatable," recalled Beth, who shared the news with her boyfriend's parents, who suggested she get a second opinion at Fox Chase. "Thank God I listened to them and went to Fox Chase. If I didn't, I might not be here today."

"I had been to Fox Chase when my mom was treated there and I had seen their commercials, but I never knew the extent of what they did," admitted Beth, who would soon find out.

At Fox Chase, she met with a thoracic surgeon specializing in minimally invasive procedures.  "He and his team gave me hope when I didn't have any," shared Elizabeth,

The doctor explained that the most important thing in treating cancer is accurate diagnosis and staging of the disease. He determined that Beth had a "pancoast tumor" (lung cancer attached to the top of the chest wall). He ordered a series of diagnostic tests, including a chest CT, PET CT, chest MRI and brain MRI. He then recommended a cervical mediastinoscopy to evaluate for disease in her lymph nodes.

"After getting all the information about my lung cancer stage, the team discussed my case at their weekly tumor board," explained Beth. The team recommended combined radiation and chemotherapy followed by surgery. "I was scared, but when they explained that each treatment alone was much less effective then the combination, I understood that my chances with radiation alone were not so good."

They recommended adding chemotherapy and surgery. And she opted for that. Thrilled with the notion of regaining her life, Beth began chemotherapy, under the guidance of her medical oncologist. After a successful course of chemotherapy and radiation, the surgeon ordered more diagnostic tests to re-stage Beth's disease. Although this frightened Beth, the results were good and so he was ready to operate.

They removed the lung that contained the cancer along with lymph nodes.

During her treatment, her boyfriend, Michael, was there every step of the way. "I couldn't have made it through all of this without his love and encouragement," shared Beth, who also appreciated the support of her son, Robert.

"The nurses were very attentive. If I needed anything, they got it right away. I waited for nothing."

Beth recovered from surgery and signed on for one more course of chemotherapy, "just to make sure the cancer was gone - and won't come back." In September 2008, she officially finished her treatment. "The nurses were very attentive. If I needed anything, they got it right away. I waited for nothing. God bless each and every one of them!"

Today, Beth continues to be checked with periodic tests. "It is nerve-wracking to be tested - but it is reassuring to know that I'm doing well; especially when I was told by the first doctor that there was nothing they could do. I'm so grateful to Dr. Lebenthal and the people at Fox Chase for not giving up on me."

If Beth has a message to share, it's this: "Don't smoke. If you do, then stop now. If you go get cancer - don't give up. Get a second opinion. If I listened to the first doctor, I would not be here today."