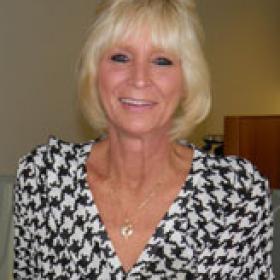 "My doctor referred me to Fox Chase Cancer Center. That was the best place for me."
‐Barbara Lanza

In January 2010, Barbara Lanza had just turned 52. Like many women her age, she was trying to lose weight and even tried green tea pills. She began experiencing stomach problems and attributed it to the pills, along with a stressful and physical job working in a dog kennel. Still, she took a family trip to Florida and visited the emergency room four times during her 10 day trip. “I was told it was pancreatitis because my cancer marker levels were too low for concern,” shared Barbara. By the time she returned home, Barbara's pain continued and she made an appointment with her family doctor.

“More tests were ordered and my doctor told me a mass was discovered on the head of my pancreas," added Barbara. "My doctor referred me to Fox Chase Cancer Center–and I completely agreed. That was the best place for me."

In February, Barbara’s Fox Chase team began ordering testing to diagnose her cancer, which turned out to be a rare form of pancreatic cancer. She met with Dr. Crystal Denlinger, a medical oncologist who specializes in treating patients with gastrointestinal cancers. “Dr. Denlinger was very thorough and took the time to research my type of cancer since it was so rare,” she said. Dr. Denlinger started Barbara on a course of chemotherapy designed to shrink the tumor.

After undergoing months of chemotherapy, Barbara was referred to Dr. Shelly Hayes, at Fox Chase–Buckingham, a satellite location near her home, for radiation therapy. “It was so convenient and everyone was so nice there,” said Barbara. She received more chemotherapy with the radiation, which continued to diminish the tumor. She received a final course of chemotherapy and then was ready for surgery.

Due to the precarious location of Barbara’s tumor (shutting off the superior mesenteric vein), Dr. John P. Hoffman, an oncologic surgeon who specializes in pancreatic and biliary tract surgery, suggested the surgery be performed at Temple Hospital, so that he could do the operation with a colleague he preferred to collaborate with, and Barbara could be placed on a vascular bypass pump, if needed. [In 2012, Fox Chase joined the Temple University Health System, providing better integration of non-cancer treatments.]

In May, Barbara was admitted for a complex surgery–which took eight hours–to remove her gall bladder, part of the pancreas, half of her stomach, her bile duct and her duodenum. Dr. Hoffman also re-routed the bowels so Barbara would retain function and not lose her quality of life.

“Dr. Hoffman is an absolutely amazing surgeon and a terrific person,” explained Barbara, who believes he saved her life. “I had a terrible prognosis, and he was able to turn it around. I would recommend him to anybody. If there was any hope to be had, Dr. Hoffman gave it to me. I just adore him.”

Once Barbara fully recovered from surgery, she had one more procedure at Fox Chase. This time a stent was put into her collapsed superior mesenteric vein, opening up a narrowing that was causing swelling of her intestines and fluid collections in her abdomen. An interventional radiologist performed the delicate procedure, which helped alleviate some of her pain and bowel complaints.

Barbara is extremely grateful for the opportunity to be treated at Fox Chase. “I had the best team–Dr. Denlinger and Dr. Hayes did everything they could to save me. And Dr. Hoffman? What can I say? He’s not head of pancreatic surgery for nothing! He’s the best there is.”