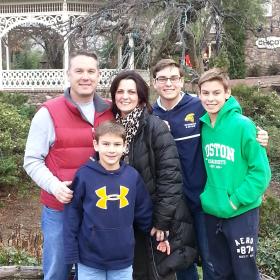 “Thank you, Dr. Farma, for everything.”
‐Annamaria Schoppe

It was June, 2011 and Annamaria Schoppe decided to enjoy a pedicure with a friend. A few weeks later, as she was changing the toe polish, she noticed the cuticle of the largest toe on her left foot was discolored and a reddish-brown line extended from the nail bed to the top of her toe.  “My first thought was that an infection resulted from that pedicure,” Annamaria recalls.  About two weeks later, the line on her toe became darker and the nail became disconnected from the cuticle. “I started to become a bit concerned. I made an appointment with a podiatrist to clear up the issue,” says Annamaria, who remembers limited details of the appointment.

“The podiatrist removed my toe nail, and then started yelling ‘Oh my, you have cancer. I haven’t seen this in 30 years; it’s cancer!’ Then, she took a biopsy and wrapped my foot. She asked her staff, ‘Don’t lose these slides, this is cancer.’ I left in a panic and called my primary doctor, who saw me the same day,” she continues. Annamaria was then referred to a dermatologist for further evaluation.

"I knew I needed to find a cancer specialist ."

Annamaria experienced continued frustration. The original slides which were taken by the podiatrist became destroyed. “I was on an emotional rollercoaster. The dermatologist was able to get a bit of tissue for the second biopsy and it concluded that I did have cancer. I knew I needed to find a cancer specialist,” Annamaria admits.

For more than 20 years, Annamaria has worked as a cardiology technician at a community hospital in Montgomery County, PA, not far from her home. “I asked a few of the doctors that I work with for a recommendation and one of them told me he was friends with Jeffrey Farma, MD a surgical oncologist at Fox Chase Cancer Center.”

During the following week, Annamaria tried to remain optimistic. “I was out with a friend for lunch and my cell phone rang. The doctor called to explain that the margins weren’t clear and that I needed to have half of my toe amputated. He referred me to Dr. Farma at Fox Chase,” Annamaria continues. “On December 22, 2011, Dr. Farma amputated my toe to the first joint and removed a lymph node in my groin.” After the biopsy results were available, Annamaria learned she’d need a third procedure to remove 13 more lymph nodes in her left groin.

"I truly believe that having Dr. Farma as my surgeon is a blessing. He’s a rock star. "

“I truly believe that having Dr. Farma as my surgeon is a blessing. He’s a rock star. He took what was a very painful experience, and made it okay for me. He explained why this had to be done and made my family feel comfortable with the decision. He hugs me, makes me feel secure and will answer any question I have. It’s been four years, and he is still the doctor I trust. I know he saved my life,” Annamaria adds.

At the age of 49 in 2016, Annamaria is enjoying her time as a devoted wife to her husband David, who works in law enforcement, and a loving mother to three sons. She is a religious person who prays every day and has strong faith. “I live for my family. I am involved with my boys in so many ways. We love to travel and spend time together as a family. My sons are all swimmers so we spend a lot of time at the pool,” she continues.

"From the beginning, Fox Chase was the best place for me."

“When I reflect on my experience at Fox Chase, I get so emotional,” admits Annamaria. “From the beginning, Fox Chase was the best place for me. I have never met more caring and devoted doctors. I’ve been through a lot and I must say it’s because of Dr. Farma that I am able to enjoy this wonderful life I have been given. Thank you, Dr. Farma for everything - you are in my prayers every day.”