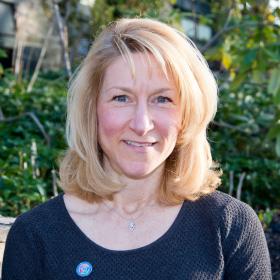 "Breast cancer was very prevalent in my family, and I wanted to do whatever I could to reduce my chances of developing the disease."
‐Amy Dysart

When I was 16 years old, my world turned upside down. My mother, Gail, was diagnosed with breast cancer. For a few years, treatment kept it under control. When she had a recurrence of her aggressive cancer at age 42, my mom was treated by the best doctors at Fox Chase Cancer Center, but, unfortunately, her recurring cancer won, and she passed away. It was 1988, and I was only 20 years old.

Before my mother’s passing, I had also lost my maternal grandmother, great grandmother, and three great aunts to breast cancer. I thought breast cancer was part of my destiny as well, but a few years later, in 1991, Fox Chase medical oncologist Dr. Mary Daly founded the Risk Assessment Program and invited me to participate. Deciding to become part of the program was a no-brainer, and I joined the program at the age of 22. For many 22-year-olds, cancer is the last thing on their mind, but, unfortunately, it was the first thing on mine.

In 1998, when I was 30, researchers were learning about the BRCA gene mutation and its role in predicting the likelihood of developing breast cancer. Per Dr. Daly’s suggestion, I agreed to genetic counseling and testing at Fox Chase to find out if I carried the BRCA mutation. Surprisingly, I tested negative. My mother’s tumor tissue was also tested for the mutation, and it also was negative. I was confused and wanted an explanation for the large number of women in my family affected by breast cancer.

In the meantime, I continued to pursue my career, which landed me a job at Fox Chase. I spent time working in both Institutional Advancement (fundraising) and special events for the hospital. Fox Chase was wonderful to my mom. I felt at home when I worked there and was thrilled to give back in my own little way. I adore the people at Fox Chase—they’re like extended family. In 2000, my husband, Ken, and I started a family, and I decided to stay home to raise my daughter, Gillian, who was named in memory of my mother.

All the while, I continued seeing Dr. Daly and her team in the Risk Assessment Program. I became used to the routine: mammography, MRI, clinic, and follow up every six months. By 2007, research had progressed, and a more comprehensive BRCA testing was available. I decided to get tested again using the more comprehensive test, but once again, my test was negative for a mutation. I was shocked and discouraged. I wanted answers. My contacts at Fox Chase introduced me to an organization called Facing Our Risk of Cancer Empowered (FORCE), which is dedicated to helping those at high risk for breast and ovarian cancer. I finally started meeting other women in the same boat as me with incredibly strong family histories of breast cancer, some of whom also tested negative for the BRCA mutation. Today, I serve as one of the outreach coordinators for the Philadelphia chapter of FORCE.

Eventually, through genetic testing and counseling, I learned that although I did not carry any of the particular BRCA gene mutations doctors can test for, there was probably another, unidentified gene mutation that runs in our family. To this day, doctors can’t explain it. That’s why genetic research is so important.

Turning 38 was a very emotional birthday for me. I was the age my mother was when she was first diagnosed. At that point, I knew I was finished having children and started considering prophylactic mastectomy and reconstruction. I struggled with the decision for the next four years. When I hit 42, the age my mom was when she died, I made the decision.

In January 2010, I underwent prophylactic surgery to remove my breasts. I was blessed to have support from my husband, family, and friends who cooked, babysat, and shopped for me after my surgery. I was finally free of the burden that I would get breast cancer one day. Cancer was no longer, and is no longer, a worry as it had been presurgery. I’ll be able to see my kids grow up, and I couldn’t be happier with my choice.

My husband and I now have three children: two daughters, ages 16 and 11, and a son, age 14. I work in my husband’s office and enjoy trail running and CrossFit. I continue to be an active participant in the Risk Assessment Program. I’ve learned so much through the program, and it’s totally changed my outlook on cancer. I follow up each year and hope to help other women who are in my situation.