Alexandrea Amerine: Starting at the Right Place for Ovarian Cancer 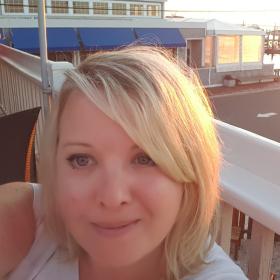 “I had never had surgery before, and I’m not a medical person, but the staff at Fox Chase made me feel like I was in good hands."
‐Alexandrea Amerine

I’ve always been a relatively healthy person. I’m 46 years old and have never had any major health concerns. That’s why I wasn’t too worried at first when I noticed a somewhat unusual protrusion from my abdomen. I assumed I had just gained some weight and told myself I needed to get on top of it. It wasn’t until my annual OBGYN appointment that I found out it was much more serious than that.

During my examination in November 2019, my doctor told me that my uterus looked inflamed. I wasn’t in any pain, but they told me I should come back in for an internal ultrasound. My mother came with me for the appointment, and both of us were surprised to see a very large mass in my abdomen show up on the screen. The next day as I was driving to work, my doctor called and told me to see an oncologist. They recommended Fox Chase Cancer Center and I called immediately.

Everyone from the first person I spoke to on the phone was calm, caring, and empathetic. We went in for the appointment within a few days. Dr. Christina Chu, a gynecologic oncologist, was the first doctor I saw and she was incredible. She was immediately someone I trusted. She was incredibly helpful in calming me down, and I felt reassured that an appropriate treatment plan was in place. She had me scheduled for surgery to remove the mass on December 31, 2019.

At the time my surgery was scheduled there had been no definite indication that the mass was cancer. The plan was to operate, take out the mass, and test it. If it was benign, I could expect to be able to go home without any major problems. If there was anything cancerous, I gave them permission right there to do a complete hysterectomy and staging biopsies.

My doctors didn’t know exactly how big the tumor was prior to surgery, but I was told it was too large for them to operate laparoscopically. Once the operation was complete, I was diagnosed with stage IA ovarian cancer and doctors had removed an eight-pound tumor.

The Road to Recovery

Going in for surgery was very nerve-racking. I had never had surgery before, and I’m not a medical person, but the staff at Fox Chase made me feel like I was in good hands. I don’t recall exactly how many days I was in the hospital recovering, but there were a few emotional days when the support of the staff could not have been more appreciated.

Everything Fox Chase did for me was executed perfectly. I have no idea how long that tumor was growing, but I’m so thankful that we got it when we did. Once everything was removed, there were no signs that the cancer had spread to other areas, so I was able to forego chemotherapy, thankfully.

My experience wasn’t like many other patients’ who come to a doctor’s office, are told they have cancer, and have to come up with a plan. For me, it was almost as if there was a plan in place already, and I didn’t have to sit and stew in those emotions.

After starting this cancer journey, I would say that I’m looking forward to getting back to traveling and spending time with friends and family, but I was lucky enough that my diagnosis never got in the way of any of those things. If I had any advice for someone with a similar diagnosis, it’s to pay attention to your body, because before my experience with cancer, I didn’t always listen to my body.

I know Fox Chase has commercials that say, “Where you start matters.” In my experience with them, that is so true. I feel so fortunate that I was able to receive treatment from Dr. Chu on my first attempt at finding an oncologist. She is an amazing person who saved my life, and I can’t say enough good things about her. When I go back to see her every six months for follow-up, it’s like visiting a friend. I’m so thankful for that.