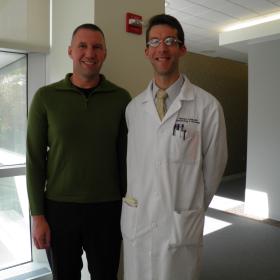 "Dr. Hall is a caring doctor and a wonderful person."
‐Alan Stachura

Few people can say they “grew up at Fox Chase,” but my siblings and I can. When I was only six years old, my mother was diagnosed with invasive breast cancer. When she arrived at Fox Chase Cancer Center to meet with medical oncologist Dr. Paul F. Engstrom, she learned that the disease had already spread to her bones.

I believe the disease had become so advanced, in part, because my mother was nursing her third child at the time and she was not offered a mammogram (plus she had not reached the age of 40, when most women have their first mammogram). My father accompanied my mother to her appointments with Dr. Engstrom. During one appointment, he mentioned a nagging pain in his back. Dr. Engstrom immediately ordered some tests. And that is when my father was diagnosed with colon cancer.

My siblings and I spent much of our childhood at Fox Chase with our parents. After a seven-year battle, my mother passed away. My father, whose cancer treatment was successful, was left to raise three children. If that wasn’t enough for a single father, he had another concern—that his children were at increased risk for cancer themselves.

On January 17, 2010, at the age of 30, my annual colonoscopy turned up a cancerous polyp. I always knew I was at risk for getting cancer, but I didn’t expect it until I was well into my 60s. Because I was in excellent health otherwise, my doctor offered me two choices for treatment: a colon resection that involved removing the cancerous portion of my colon or removal of my entire colon. I chose the least invasive procedure because of the potential side effects of removing my entire colon, and the polyp turned out to be malignant. My tumor never showed up in bloodwork or a CAT scan, so I’m vigilant about follow-up appointments and screening tests.

I scheduled the colon resection for February 4, 2010. My surgery was done in Indianapolis because my partner, Karl, was an anesthesiology resident there and I didn’t want to be stuck at home in Pennsylvania alone for the six to eight weeks of recovery. Everything was coordinated through Fox Chase. At the time, Karl and I had a long-planned trip to Fiji that was scheduled to end just five days prior to surgery. I consulted with my surgeon, who said, “Go, have fun. A few days won’t make a difference.” We went to Fiji and had a relaxing week before my surgery, and I was probably the tannest patient they had seen in February!

After my colon resection, I took seven weeks off from my job as a senior manager of government relations for a corporate compliance company, where I’ve worked for 17 years. I only really stayed away from work for about two and a half weeks and worked from home for the remaining weeks. Eight weeks after surgery, I was the best man in my brother’s wedding.

Just before the surgery, a certified genetic counselor reached out to encourage me to participate in the Fox Chase Risk Assessment Program, which helps patients understand their family risk for cancer. I decided to get tested for Lynch syndrome, which puts individuals at increased risk for several types of cancer, including colon cancer. When I received the news that I tested positive for Lynch syndrome, I encouraged my siblings to be tested. My brother, David, is a molecular biologist who works with treatments for leukemia, so he was very interested in being tested right away. Fortunately, he tested negative. My sister, Barbara, wasn’t as lucky. Her test results were also positive for Lynch syndrome. With that information, she now gets screened annually and is aware of her increased risk for cancer.

My extended family has also listened to me, and several aunts, uncles, and cousins have been tested. The Risk Assessment Program provides much-needed education and support for people in my situation.

Following surgery, Dr. Engstrom referred me to Dr. Michael Hall, a gastrointestinal cancer specialist at Fox Chase who also is involved in the Risk Assessment Program. Ever since my surgery, I’ve visited Dr. Hall every three months for bloodwork and a CAT scan to ensure everything is going well. Dr. Hall is a caring doctor and a wonderful person. Since my surgery, I’ve only had tests, checkups, and colonoscopies. I’ve been cancer-free for seven and a half years.

Cancer is definitely part of my life, but it certainly isn’t stopping me from enjoying and living my life. Once I recovered from surgery, I returned to work and the gym to work out. I love to travel and head to the beach as often as possible. I hike, bike, and row. I literally travel every week for work or fun and average about 300,000 miles per year on a plane.

Having cancer makes you remember to enjoy every day and reminds you to take care of yourself. It doesn’t consume me, but I certainly always have it in the back of my mind. I try to educate people about it and encourage early detection. I frequently answer questions from those who have been diagnosed. Otherwise, my life is very similar to what it was before—with a few extra scars!

As I move forward with my life, I will continue to be vigilant about my checkups and will encourage others to do the same. If you think there’s a risk for cancer in your family, there probably is. The genetic counselors at Fox Chase’s Risk Assessment Program provide valuable information and guidance. I recommend them to anyone with a strong family history of cancer.