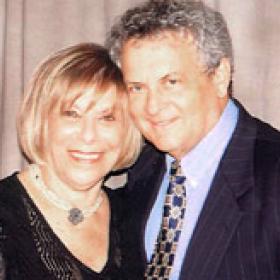 "As soon as we met Dr. Uzzo, we felt better. He has such compassion and kindness."
‐Mark Gottlieb

Mark Gottlieb is a New Yorker at heart. He raised his family there and still visits his children and grandchildren often. However, his move to the Philadelphia area in 1988 has proved to be a good one. It is where he met his wife, Linda; started a booming baby-proofing business; and was successfully treated for a rare type of cancer at Fox Chase Cancer Center.

Because Mark had previously battled bladder cancer, his urologist provided thorough exams and comprehensive tests each year. In 2004, his doctor detected irregular cells in his cytology report. The scan that followed revealed a tumor in his ureter. Mark was diagnosed with stage 3-4 transitional cell cancer of the ureter, which connects the kidney to the bladder. The ureter is lined with transitional cells, where the cancer is formed.

"I couldn't believe we were dealing with cancer again."

Cancer of the ureter is rare and is typically treated with surgery. His urologist believed Mark would receive the best treatment at Fox Chase Cancer Center and referred them to Robert Uzzo, MD, chairman of the department of surgery, who specializes in urologic cancer surgery.

As a urologist who spent an extra 3 years as a urologic oncology fellowship, Dr. Uzzo was uniquely qualified to perform this complicated procedure, called a segmental resection of the ureter and reimplant, without removing the kidney. "As soon as we met Dr. Uzzo, we felt better. He has such compassion and kindness," shared Linda. "We immediately felt a connection and were certain we had the best doctor treating Mark."

Dr. Uzzo explained, "During the complex procedure, I removed the part of the ureter that was cancerous and refashioned the bladder so I could reattach the ureter without removing the kidney." This treatment is effective when the cancer appears in the mid to lower third of the ureter.

"The nurses were fabulous."

Mark spent the next 10 days in the hospital. "The nurses were fabulous," Linda recalled. "They are such special people." She asked them how they are able to be so wonderful day after day. "But by the grace of God, go I," is what one nurse told her. Linda still remembers her face when she said those words.

The surgery was a success - Mark's quality of life was preserved and he had no long-term side effects. Mark consulted with his medical oncologist, Gary Hudes, MD, who explained that the cancer had not spread beyond the ureter. However, he recommended a course of chemotherapy to reduce the risk of recurrence. Given Mark's history with bladder cancer, he decided to undergo the treatment.

Although chemotherapy usually results in patients losing their hair, Mark lucked out. "Mark has beautiful salt and pepper curly hair," Linda laughed. "I went out and bought a bunch of hats. But he never lost a single hair. More importantly, the treatment worked and Mark resumed his daily routine."

"I love what I do and wanted to make sure I could continue to operate my business."

After a 2 month recovery, Mark slowly returned to work. "I love what I do and wanted to make sure I could continue to operate my business." In 1996, when Linda became a grandmother, her daughter asked Mark to help her "baby proof" her house. That sparked an idea - he started his own baby-proofing business, called "Safe at Home." It was a success since its inception.

"We knew Fox Chase was the place to take my wife when she was diagnosed 5 years after me."